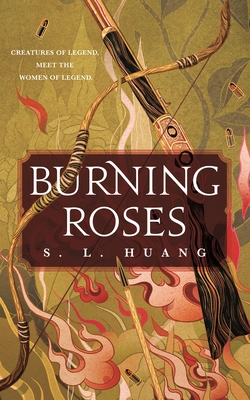 Burning Roses is a gorgeous fairy tale of love and family, of demons and lost gods, for fans of Zen Cho and JY Yang.

Rosa, also known as Red Riding Hood, is done with wolves and woods.

Hou Yi the Archer is tired, and knows she’s past her prime.

They would both rather just be retired, but that’s not what the world has ready for them.

When deadly sunbirds begin to ravage the countryside, threatening everything they’ve both grown to love, the two must join forces. Now blessed and burdened with the hindsight of middle age, they begin a quest that’s a reckoning of sacrifices made and mistakes mourned, of choices and family and the quest for immortality.

S. L. Huang has a math degree from MIT and is a weapons expert and professional stuntwoman who has worked in Hollywood on Battlestar Galactica and a number of other productions. Her novels include the Cas Russell series (formerly known as Russell's Attic), which includes Zero Sum Game, Null Set, and Critical Point. Huang's short fiction has appeared in Strange Horizons, Nature, Daily Science Fiction, and The Best American Science Fiction & Fantasy 2016.

"The regret and wisdom of aging monster hunters, who are starting to question who was the monster in the equation anyway, make for a complex and compelling relationship. . . . Huang is clearly an author to watch."—Booklist