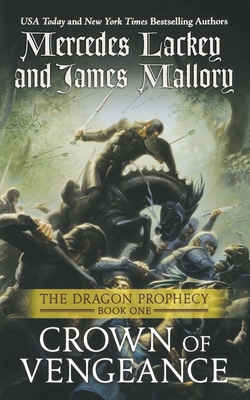 Mercedes Lackey and James Mallory, bestselling authors individually and together, return to the world of their New York Times and USA Today bestselling Obsidian and Enduring Flame Trilogies with Crown of Vengeance.

Here, readers will learn the truth about the Elven Queen Vielissiar Faricarnon, who was the first to face the Endarkened in battle and the first to bond with a dragon. She worked some of the greatest magics her world has ever known, and paid the greatest Price.

Crown of Vengeance is an exciting fantasy adventure that will appeal to fans of Mercedes Lackey's Valdemar series. No previous knowledge of Lackey and Mallory's collaborations is necessary to enjoy this fast-paced, action-packed novel, but returning readers will be excited to discover this amazing story.

The Obsidian Trilogy:
The Outstretched Shadow
To Light a Candle
When Darkness Falls

“A thoughtfully created world, engaging characters, and a tighter plot than many fantasy epics make this new novel a must-have.” —VOYA on The Phoenix Unchained

“Lackey and Mallory combine their talents for storytelling and world crafting into a panoramic effort. Filled with magic, dragons, elves, and other mythical creatures, this title belongs in most fantasy collections.” —Library Journal on To Light a Candle

“Delightful.” —Booklist on The Outstretched Shadow

James Mallory is the author of the Merlin trilogy (Merlin: The Old Magic; Merlin: The King’s Wizard; Merlin: The End of Magic). He lives in upstate New York.
Loading...
or support indie stores by buying on