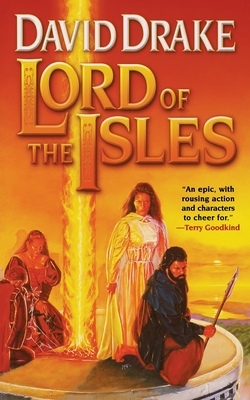 Lord of the Isles (Paperback)

With Lord of the Isles, David Drake returns to fantasy with a towering and complex epic of heroic adventure in an extraordinary and colorful world where the elemental forces that empower magic are rising to a thousand-year peak.

In the days following an unusually severe storm, the inhabitants of a tiny seaport town travel toward romance, danger, and astonishing magic that will transform them and their world.


Praise For Lord of the Isles…

“One of the finest epic fantasies of the decade.” —Piers Anthony

“Unlike most modern fantasy, David Drake's Lord of the Isles is an epic with the texture of the legends of yore, with rousing action and characters to cheer for.” —Terry Goodkind

“True brilliance is as rare as a perfect diamond or a supernova. Lord of the Isles is truly brilliant. We are in at the birth of a classic....There is a lot of fantasy out there, but there is only one Lord of the Isles.” —Morgan Llywelyn