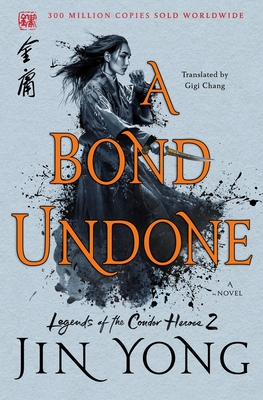 The Definitive Edition (Legends of the Condor Heroes #2)

A Bond Undone is the second book in Jin Yong's epic Chinese classic and phenomenon Legends of Condor Heroes series, published in the US for the first time!

In the Jin capital of Zhongdu, Guo Jing learns the truth of his father’s death and finds he is now betrothed, against his will, to two women. Neither of them is his sweetheart Lotus Huang.

Torn between following his heart and fulfilling his filial duty, Guo Jing journeys through the country of his parents with Lotus, encountering mysterious martial heroes and becoming drawn into the struggle for the supreme martial text, the Nine Yin Manual. But his past is catching up with him. The widow of an evil man he accidentally killed as a child has tracked him down, intent on revenge.

Meanwhile, his true parentage at last revealed, Yang Kang, the young prince Guo Jing must face in the Garden of the Eight Drunken Immortals, is forced to choose his destiny. Will he continue to enjoy the life of wealth and privilege afforded to him by the invader of his homeland, or give up all he has known to avenge his parents?


Praise For A Bond Undone: The Definitive Edition (Legends of the Condor Heroes #2)…