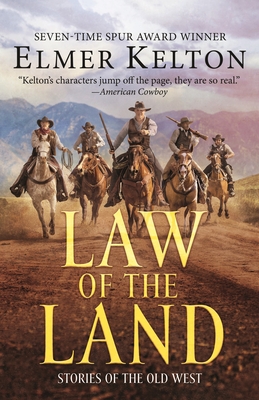 Law of the Land

Stories of the Old West

An action-packed collection of stories of the old West, Law of the Land includes the never-before-published "Biscuits for a Bandit."

Sixteen stories, where good meets bad, and everything in between, from the legendary author of the west, Elmer Kelton. The Law of the Land chronicles some of his most exciting and dangerous tales of the old west, collected together for the first time.


Praise For Law of the Land: Stories of the Old West…

“Kelton is a genuine craftsman with an ear for dialogue and, more important, an understanding of the human heart.”
—Booklist

“You can never go wrong if . . . you pick up a title by Elmer Kelton . . . Kelton's characters jump off the page, they are so real.”
—American Cowboy

“Elmer Kelton is a splendid writer.”
—The Dallas Morning News

“The hallmark of any Elmer Kelton novel is his thorough research and his feel for the time and place.”
—Tulsa World

Elmer Kelton (1926-2009) was the award-winning author of more than forty novels, including The Time It Never Rained, Other Men’s Horses, Texas Standoff and Hard Trail to Follow. He grew up on a ranch near Crane, Texas, and earned a journalism degree from the University of Texas. His first novel, Hot Iron, was published in 1956. Among his awards were seven Spurs from Western Writers of America and four Western Heritage awards from the National Cowboy Hall of Fame. His novel The Good Old Boys was made into a television film starring Tommy Lee Jones. In addition to his novels, Kelton worked as an agricultural journalist for 42 years. He served in the infantry in World War II. He died in 2009.
Loading...
or support indie stores by buying on