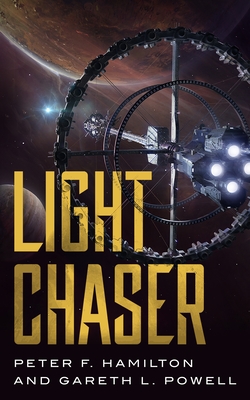 Amahle is a Light Chaser – one of a number of explorers, who travel the universe alone (except for their onboard AI), trading trinkets for life stories.

But when she listens to the stories sent down through the ages she hears the same voice talking directly to her from different times and on different worlds. She comes to understand that something terrible is happening, and only she is in a position to do anything about it.

And it will cost everything to put it right.

"[Gareth L.] Powell's writing is fast-paced and fun and full of adventure. He's on my must-read list." —Ann Leckie

Peter F. Hamilton began writing in 1987, and sold his first short story to Fear magazine in 1988. He has written many bestselling novels, including the Greg Mandel series, the Night's Dawn trilogy, the Commonwealth Saga and the Void trilogy, as well as several standalone novels including Fallen Dragon and Great North Road.

GARETH L. POWELL writes science fiction about extraordinary characters wrestling with the question of what it means to be human. He has won the BSFA Award twice, for Ack-Ack Macaque and Embers of War, and has also been a finalist for the Locus Award. He lives in Bristol, UK with his children.
Loading...
or support indie stores by buying on