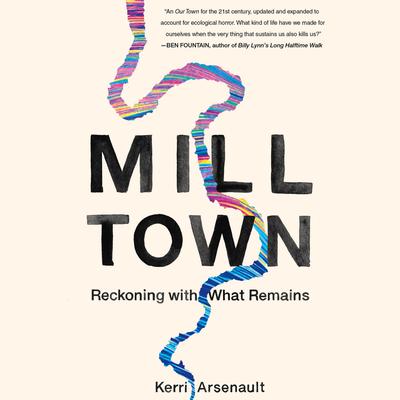 Reckoning with What Remains

“This is a beautifully written story about two small towns in Maine and the paper mill that is the foundation of their economy. It tells the much bigger story of the sacrifice of the workers, and the injustices to them and the environment. Arsenault masters the nuances of family and history, which pulled me into the story in the first few pages and kept me there. A tender and honest reveal of her own family and hometown, and a truthful history of our nation. I’ll be recommending this as a must-read to our customers.”
— Todd Miller, Arcadia Books, Spring Green, WI
View the List

"This is a listen for anyone interested in small-town America, how it's changed, and why it matters...Though Arsenault may not be a professional narrator, her passion for these important stories comes through with just the right amount of sincerity." -- AudioFile Magazine

A galvanizing and powerful debut, Mill Town is an American story, a human predicament, and a moral wake-up call that asks: what are we willing to tolerate and whose lives are we willing to sacrifice for our own survival?

Kerri Arsenault grew up in the rural working class town of Mexico, Maine. For over 100 years the community orbited around a paper mill that employs most townspeople, including three generations of Arsenault’s own family. Years after she moved away, Arsenault realized the price she paid for her seemingly secure childhood. The mill, while providing livelihoods for nearly everyone, also contributed to the destruction of the environment and the decline of the town’s economic, physical, and emotional health in a slow-moving catastrophe, earning the area the nickname “Cancer Valley.”

Mill Town is an personal investigation, where Arsenault sifts through historical archives and scientific reports, talks to family and neighbors, and examines her own childhood to illuminate the rise and collapse of the working-class, the hazards of loving and leaving home, and the ambiguous nature of toxics and disease. Mill Town is a moral wake-up call that asks, Whose lives are we willing to sacrifice for our own survival?

"While this is a portrait of a town in decline, it’s also a paean to the community that cared for it and those who have remained there, including Arsenault’s own classmates, friends, and family. The author’s unusually quiet, tender reading evinces that love, while also clearly setting that affection against the brutality of the forces that have laid Mexico low." -- Booklist