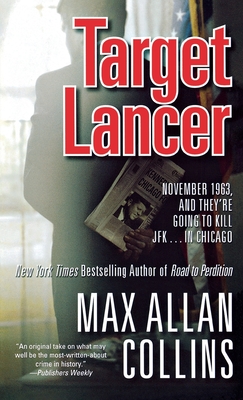 “A whirlwind tour of the story surrounding Marilyn Monroe's untimely demise as it might have been covered in the garish pages of Confidential magazine, or by TMZ for that matter, with more grit than George Baxt's Hollywood mysteries.” —Library Journal, on Bye Bye, Baby

“Collins convincingly portrays the real-life players in the drama, who include Jimmy Hoffa and Frank Sinatra. Readers with a taste for hard-boiled roman à clef will hope that more Heller is in the offing.” —Publishers Weekly

“A Hollywood novel that's more interesting than the true story--if, in fact, it's not what really happened anyway. Collins's twist on the American mystery simply can't be put down.” —RT Book Reviews, on Bye Bye, Baby

MAX ALLAN COLLINS was the Mystery Writers of America (MWA)'s 2017 Grand Master. He is the bestselling author of the graphic novel Road to Perdition, the basis for the hit film starring Tom Hanks. He has won two Shamus Awards, for True Detective and Stolen Away, both from his series of Nathan Heller novels. A prolific writer, Collins' other works include mystery novels, screenplays, comic books, film novelizations, and historical fiction.
Loading...
or support indie stores by buying on