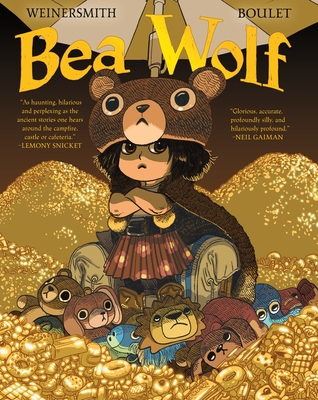 A modern middle-grade graphic novel retelling of Beowulf, featuring a gang of troublemaking kids who must defend their tree house from a fun-hating adult who can instantly turn children into grown-ups.

Listen! Hear a tale of mallow-munchers and warriors who answer candy’s clarion call!

Somewhere in a generic suburb stands Treeheart, a kid-forged sanctuary where generations of tireless tykes have spent their youths making merry, spilling soda, and staving off the shadow of adulthood. One day, these brave warriors find their fun cut short by their nefarious neighbor Grindle, who can no longer tolerate the sounds of mirth seeping into his joyless adult life.

As the guardian of gloom lays siege to Treeheart, scores of kids suddenly find themselves transformed into pimply teenagers and sullen adults! The survivors of the onslaught cry out for a savior—a warrior whose will is unbreakable and whose appetite for mischief is unbounded.

They call for Bea Wolf.

"Weinersmith’s richly evocative turns of phrase run the gamut from hilarious to heart-rending and maintain the flavor of the original without bogging the pace down amid the kennings. Boulet’s illustrations imbue the shenanigans with gleeful energy and a touch of dark absurdity that children, seeing their own fears and triumphs reflected, will delight in."—Kirkus, starred review

"Readers will wish they could pledge their plastic swords to defending Treeheart and the sanctity of wild childhoods everywhere."—School Library Journal, starred review

"This is true bardic glory, a wild embrace of absurdity and wit with exaggerated language used for maximum impact...Boulet’s illustrations are no less epic than the story, and the finely lined black and white drawings invite careful examination, with the payoff being clever visual side jokes."—The Bulletin of the Center for Children's Books, starred review

“Bea Wolf is
a) Beowulf retold for kids;
b) a genuinely funny story in its own right;
c) a pretty much perfect melding of words and the most charming illustrations in an alliterative romp through the oldest surviving English poem, served fresh and fabulous; and
d) glorious, accurate, profoundly silly, and hilariously profound.” —Neil Gaiman

“As haunting, hilarious and perplexing as the ancient stories one hears around the campfire, castle or cafeteria.”—Lemony Snicket

"The story that inspired J.R.R. Tolkien and entranced Seamus Heaney has now been reworked with vivid illustrations, heroic kids, and extra Fudgsicles. The result is the most delightful, inventive, joyful epic ever created. I simply can't express how much I love Bea Wolf." —Tim Harford, host of Cautionary Tales

“In this uproarious rampage of rowdiness, the Bea Wolf is heroically preteen, when normal horrible kids fight off adult monsters trying to make them grow up. Highly recommended for grandparents and grandkids of all ages.” —Dr. Kevin Kiernan, Editor of the Electronic Beowulf, Emeritus Professor of English, and T. Marshall Hahn, Senior Professor of Arts and Sciences

"What a joyous romp! I was utterly enthralled." —Dr. Jennifer Neville, Reader in Anglo-Saxon Literature, Royal Holloway, University of London

Zach Weinersmith is the creator of the popular webcomic SMBC, the creator of the nerd comedy show BAHFest, and the co-author of the New York Times bestselling popular science book, Soonish. He is the artist of First Second's Open Borders and the writer of Bea Wolf, a modern comedic retelling of the classic Beowulf epic.

Boulet was born and raised in France where he studied art in Dijon and Strasbourg. He started working in comics in the early 2000s and published a dozen books for young readers before creating bouletcorp.com, his worldwide-renowned website which got adapted in a series of 11 best-selling comic books.

He also worked on the critically acclaimed French series Dungeon with Lewis Trondheim and Joann Sfar. His new sci-fi series Bolchoi Arena has already been nominated twice at the Angouleme International Comic Festival.

He currently lives in Paris, working in comics, illustration and animation.