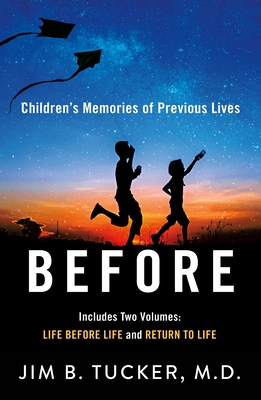 A fully updated 2-in-1 edition, with a new introduction by the author, combining Dr. Jim B. Tucker's bestselling books about children who remember past lives—Return to Life and Life Before Life.

These two books contain first-person accounts of Jim B. Tucker's experiences with a number of extraordinary children with memories of past lives, and expands on the international work started by Tucker's University of Virginia colleague Ian Stevenson.

Tucker's work has been lauded by the likes of parapsychologist Carol Bowman and Deepak Chopra, and has been described by some as quantum physics. His goal in each case of a child reporting memories of previous lives is to determine what happened—what the child has said, how the parents have reacted, whether the child's statements match the life of a particular deceased person, and whether the child could have learned such information through normal means. Tucker has found case studies that provide persuasive evidence that some children do, in fact, possess memories of previous lives.

Thought-provoking and captivating, the stories in Before urge readers, skeptics and supporters alike to think about life, death, and reincarnation and to reflect about their own consciousness and spirituality.


Praise For Before: Children's Memories of Previous Lives…

“In this very elegant book, Dr. Tucker offers the most convincing scientific evidence for the fact that our consciousness survives physical death. And indeed, takes quantum leaps of creativity in the form of reincarnation. The model that Dr. Tucker presents opens a new vision of who we are, limitless beings that fill up all of space and time.” —Deepak Chopra, author of Life After Death: The Burden of Proof

“Jim Tucker gives us a clear, concise and eminently rational insight into a 40 year investigation of what is unquestionably the best evidence for the existence of reincarnation. We are lucky to have in him a worthy successor to Ian Stevenson.” —TOM SHRODER, author of Old Souls: Compelling Evidence From Children Who Remember Past Lives

“Anyone with an open mind, on reading Dr. Jim B. Tucker's Life Before Life, will realize that our conventional concepts of life and death are ripe for revision. The possibilities raised by this book for human destiny are as hopeful as the current view is grim. Life Before Life is extraordinarily important.” —Larry Dossey, M.D., author of The Extraordinary Healing Power of Ordinary Things, Reinventing Medicine, and Healing Words

“With his training as a pediatric psychiatrist, and the mind of an inquiring scientist, Dr. Jim Tucker takes a fresh look at one of life's most intriguing questions: 'Does consciousness survive death?' Through the hundreds of case studies of his predecessor, Dr. Ian Stevenson, and his own cases, Dr. Tucker adds new insight to this amazing research, and draws us closer to understanding this perennial mystery.” —CAROL BOWMAN, author of Children's Past Lives and Return From Heaven

“Life Before Life adds to the increasingly impressive science of consciousness and the continuity of mind/memory…this book is the tip of an important iceberg that will continue to expand our knowledge of the spiritual reality of Life.” —C. NORMAN SHEALY, M.D., Ph.D., President, Holos University Graduate Seminary; Founding President, American Holistic Medical Association; author of Youthful Aging—Secret of the Fountain

“Jim B. Tucker's fine presentation of Ian Stevenson's decades of rigorous scientific research into evidence of children's apparent past-life recollections expresses the true spirit of scientific skepticism, rather than the knee-jerk materialism that all too often waves that proud banner.” —B. ALAN WALLACE, President of the Santa Barbara Institute for Consciousness Studies

“These incredible cases are not simply solid grounds for accepting some form of reincarnation into our Western worldview. These are heart-rending, poignant reminders that many of us do not quite 'fit' into the cultural and religious worlds into which we are born. Obviously, we are more than these worlds. Way, way more.” —Jeffrey J. Kripal, author of Authors of the Impossible: The Sacred and the Paranormal

Jim B. Tucker, M.D. is a child psychiatrist at the University of Virginia, where he directs research into children's reports of past-life memories at the Division of Personality Studies and serves as Medical Director of the Child & Family Psychiatry Clinic. He is the author of Life Before Life and the New York Times Best Seller Return to Life.
Loading...
or support indie stores by buying on