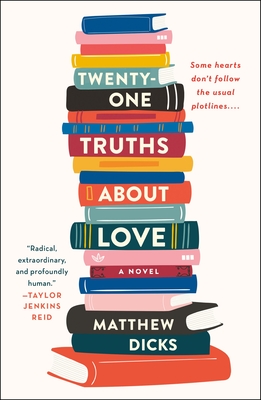 From Matthew Dicks, the author of Memoirs of an Imaginary Friend, comes Twenty-one Truths About Love, "an unconventional, endearing tale of impending fatherhood" (The Washington Post).

Daniel Mayrock's life is at a crossroads. He knows the following to be true:

1. He loves his wife Jill... more than anything.
2. He only regrets quitting his job and opening a bookshop a little (maybe more than a little)
3. Jill is ready to have a baby.
4. The bookshop isn’t doing well. Financial crisis is imminent. Dan doesn't know how to fix it.
5. Dan hasn’t told Jill about their financial trouble.
6. Then Jill gets pregnant.

This heartfelt story, written entirely in lists, is about the lengths one man will go to and the risks he will take to save his family. But Dan doesn’t just want to save his failing bookstore and his family’s finances:

1. Dan wants to do something special.
2. He’s a man who is tired of feeling ordinary.
3. He’s sick of feeling like a failure.
4. He doesn't want to live in the shadow of his wife’s deceased first husband.

Dan is also an obsessive list maker; his story unfolds entirely in his lists, which are brimming with Dan’s hilarious sense of humor, unique world-view, and deeply personal thoughts. When read in full, his lists paint a picture of a man struggling to be a man, a man who has reached a point where he’s willing to do anything for the love (and soon-to-be new love) of his life.


Praise For Twenty-one Truths About Love: A Novel…

An Indie Next List - "Great Reads from Booksellers You Trust" - pick for 2019!
November 2019's LibraryReads pick!
One of Chatelaine's "Best Romance's to Cozy Up With This Fall"

"It's not quite enough to say that Twenty-one Truths About Love is original, it is radical and extraordinary. I have no idea how Matthew Dicks made a story comprised entirely of lists feel so human but that's exactly what this story is: honest, vulnerable, hilarious, and profoundly human."—Taylor Jenkins Reid, New York Times bestselling author of Daisy Jones and the Six

"Twenty-one Truths About Love by Matthew Dicks is a fresh, humorous exploration of what makes us vulnerable and what makes us responsible, and you can't help but root for Daniel Mayrock even when he's at his most mistaken. This is a love story of great pathos and beauty."—Sharma Shields, author of The Cassandra

"Funny, sad, uplifting but always relatable. A must read for fans of Rachel Joyce and Gabrielle Zevin."—Shelf Awareness

"These lists—and the silences they outline—conjure a tense world. Dan's lists reflect his increasing desperation, ratcheting up the tension until life throws a potentially devastating curveball at him that pushes him to reassess everything he had thought to be true. A clever, genre-bending portrait of a man under pressure."—Kirkus

"Recurring themes, including a pregnancy, money woes, and a developing friendship, give the novel momentum."—Minneapolis Star-Tribune

"Reasons we love Twenty-One Truths About Love:
1. It's deeply moving and full of emotion.
2. The protagonist is relatable (he quit his job to open a bookshop!) and so are his struggles.
3. It's a thoughtful reflection about love and what it means to be a good person.
4. Did we mention the protagonist owns a bookshop?
5. It's one of the most unique books out today, because:
6. It's written entirely in lists."—BookBub

"The most phenomenally entertaining and clever novel of the year. Poignant and hilarious...Grab a Little Debbie snack cake (or four) and curl up with what is sure to be a singular sensation in the literary world."—BookWeb

"A fresh, original new novel. Blending humorous and witty takes on life's idiosyncrasies with a raw and deeply human main character, dicks pens the perfect between-the-holidays book for readers who enjoyed Mr. Penumbra's 24-Hour Bookstore and How Hard Can it Be?"—BookReporter

"If you're looking for a fun, fresh, and—I cannot stress this enough—incredibly heartwarming book about themes like fatherhood, family, and living up to one's potential, Matthew Dicks has crafted the perfectly imperfect character in Dan Mayrock, and his ingenious list-format makes this a can't-be-missed read."—The Young Folks

MATTHEW DICKS is a writer and elementary school teacher. His articles have been published in the Hartford Courant and he has been a featured author at the Books on the Nightstand retreat. He is also a Moth storyteller and a two-time StorySLAM champion. Dicks is the author of the novels Memoirs of an Imaginary Friend, Something Missing, and Unexpectedly Milo. He lives in Newington, Connecticut, with his wife, Elysha, and their children, Clara and Charlie.
Loading...
or support indie stores by buying on