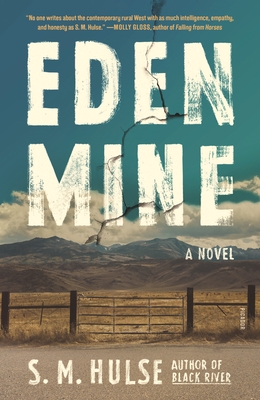 In S. M. Hulse's Eden Mine, the award-winning author of Black River examines the aftershocks of an act of domestic terrorism rooted in a small Montana town on the brink of abandonment, as it tears apart a family, tests the faith of a pastor and the loyalty of a sister, and mines the deep rifts that come when the reach of the government clashes with individual freedom.

For generations, the Fabers have lived near Eden Mine, scraping by to keep ahold of their family's piece of Montana. Jo and her brother, Samuel, will be the last. Despite a long battle, their property has been seized by the state through eminent domain—something Samuel deems a government theft.

As Jo packs, she hears news of a bombing. Samuel went off to find work in Wyoming that morning, but soon enough, it's clear that he's not gone but missing, last seen by a security camera near the district courthouse—now a crime scene—in Elk Fork. And the nine-year-old daughter of a pastor at a nearby church lies in critical condition.

Can the person Jo loves and trusts most have done this terrible thing? Can she have missed the signs? The last time their family met violence, Jo lost her ability to walk. Samuel took care of her, outfitted their barn with special rigging so she could still ride their mule. What secrets has he been keeping? As Jo watches the pastor fight for his daughter, watches the authorities hunt down a criminal, she wrestles with an impossible choice: Must she tell them where Samuel might be? Must she choose between loyalty and justice? Between the brother she knows and the man he has become?

A timely story of the tensions splintering families and communities all over this country, S.M. Hulse's Eden Mine is also a steady-eyed gaze into the ideals of the West and the legacies of violence, a moving account of faith in the face of evil, and a heartrending reckoning of the terrible choices we make for the ones we love.


Praise For Eden Mine: A Novel…

"Hulse’s talent is evidenced by her nuanced portrayal of Jo and the way she sees the world. In her relationship with Asa, in particular — both are scarred, both trying to heal — Hulse . . . perfectly captures not only the landscape of the American West, but also what it feels like to survive in a town that is dying."
—Alexi Zentner, The New York Times Book Review

"Across two novels, S.M. Hulse has been inventing a new version of the western. Part of her mission involves updating the genre’s content, thrusting its violent themes into the present day . . . [Eden Mine is] a welcome entry in the genre of terror-themed fiction, which since 9/11 has been prone to either Don DeLillo-esque geopolitical pronunciamentos or unsatisfying mind-of-a terrorist psychological studies. Hulse simply concedes that the motivations of a terrorist are unknowable; she wants to understand the blast radius, not the bomb."
—Mark Athitakis, The Los Angeles Times

"An urgent, timely novel about a courthouse bombing, rural Montana, and a clash with the government."
—Men's Journal

“This is a surprising and timely book, written with a compassion and tenderness rarely given to difficult topics like political tension within families and communities. In our polarized world, where reductionist thinking is largely the norm, S. M. Hulse’s novel offers us nuanced characters who are trying to sort out their complicated bonds to other people. It reminds us that no individual should ever be reduced to one moment, one action, or one belief.”
—Lanta Davis, Christianity Today

"Brilliant . . . The slow revelations . . . make it deeply compelling . . . There are wonderful descriptions of Jo’s mule Lockjaw, which highlight Hulse’s understanding of horses and their relatives . . . The best part may be the way that the story is concluded, since the reader knows that a showdown is inevitable. The whole thing is beautifully done and rightfully will be a favorite of book discussion groups who will enjoy the character development and the themes of art, faith, morality, and paralysis, set within the wide spaces and dying towns of Montana."
—Leslie DeLooze, The Daily News

“Hulse follows up her strong debut (Black River, 2015) with an even stronger novel about the fallout from an act of domestic terrorism . . . [A] dense yet lucid narrative. The nail-biting denouement is . . . an additional sign of this young writer’s mature artistic powers. Reflective, evocative, and quietly moving.”
—Kirkus (starred review)

"A taut, poignant tale . . . The dramatic conclusion kicks like a mule, a testament to Hulse's storytelling acumen."
—Publishers Weekly

“In this subtle, powerful, unflinchingly honest novel, S. M. Hulse takes for her palette some of life’s most vital subjects—faith, love, loyalty, family, goodness, God—and paints her story with all the skill of a master artist blocking out her canvas, tender stroke by tender stroke, bringing it to life. Each color more complex than its name, each line put down with purpose. As sweet-souled as it is clear-eyed, Eden Mine will linger with me for a long time.”
—Josh Weil, author of The Age of Perpetual Light

"Mourning, loss, and love illuminate the pages of Hulse's ruminative novel. Especially fine is her rendering of a person of faith struggling with doubt and the nature of evil. Fans of Annie Proulx may appreciate the novel's pensive mood and the exploration of a place where people have few options and little hope."
—Joan Curbow, Booklist

“No one writes about the contemporary rural West with as much intelligence, empathy, and honesty as S. M. Hulse. Eden Mine is a deep dive below the headlines, a novel about family, friends, and neighbors grappling with the aftermath of an act of domestic terrorism. It’s a luminous, deeply moving, insightful novel, abiding at the intersection of public politics and the most private of emotions. There’s nothing else quite like it.”
—Molly Gloss, author of Falling from Horses

“Eden Mine is one of the rarest of novels: it’s a page-turning thriller, yes, but its twists and turns are the result of complex characters making difficult, heartbreaking choices. The novel illuminates both contemporary political tensions and older, deeper ones, particularly the tragedies that can arise when we assume an easy understanding of what’s right, what’s wrong—and what qualifies as justice.”
—Christopher Coake, author of You Came Back

“One of the few novelists working today . . . capable of portraying religion as a natural, integral element of characters’ lives—the way it is for most Americans . . . A surprisingly wise young writer.”
—Ron Charles, The Washington Post

S. M. Hulse’s first novel, Black River, was a finalist for the PEN/Hemingway Award for Debut Fiction, an ABA Indies Introduce title, an Indie Next pick, and the winner of the Reading the West Book Award. Hulse received her MFA from the University of Oregon and was a fiction fellow at the University of Wisconsin–Madison. An avid horsewoman, she has lived throughout the American West.
Loading...
or support indie stores by buying on