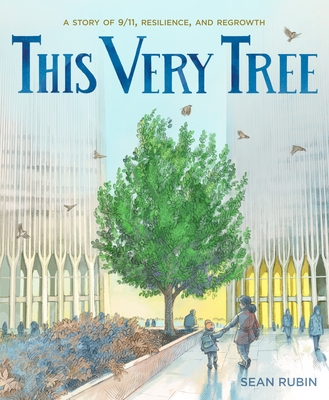 A Story of 9/11, Resilience, and Regrowth

A deeply moving story about community and resilience, from the point-of-view of the Callery pear tree that survived the attacks on September 11, from Eisner Award-nominated author-illustrator Sean Rubin.

In the 1970s, nestled between the newly completed Twin Towers in New York City, a Callery pear tree was planted. Over the years, the tree provided shade for people looking for a place to rest and a home for birds, along with the first blooms of spring.

On September 11, 2001, everything changed. The tree’s home was destroyed, and it was buried under the rubble. But a month after tragedy struck, a shocking discovery was made at Ground Zero: the tree had survived.

Dubbed the “Survivor Tree,” it was moved to the Bronx to recover. And in the thoughtful care of the New York City Department of Parks and Recreation, the Callery pear was nursed back to health. Almost a decade later, the Survivor Tree returned home and was planted in the 9/11 Memorial to provide beauty and comfort…and also hope.

This is the story of that tree—and of a nation in recovery. Told from the tree’s perspective, This Very Tree is a touching tribute to first responders, the resilience of America, and the restorative power of community.


Praise For This Very Tree: A Story of 9/11, Resilience, and Regrowth…

* "Rubin’s lively and energetic cartoon art takes the focus quickly from destruction and desolation to growth and renewal . . . A volume that could be part of any unit on 9/11 for children, or a lesson on resilience. " —Horn Book, starred review

"A poignant tribute to a city’s resilience and a powerful introduction to the topic for young readers." —Publishers Weekly

"This beautiful book deserves a spot in elementary collections across the country." —School Library Journal

"A stirring story of hope and healing in the aftermath of immense tragedy." —Bookpage

"Inspiring . . . Particularly striking is the growth of the tree and the new tower at the site of the World Trade Center, shown in a series of parallel illustrations. Although the circumstances are different, this story of urban resilience and rebuilding remains relevant today." —Booklist

Sean Rubin was born and raised in Brooklyn, New York. He is the illustrator of The Astronaut Who Painted the Moon: The True Story of Alan Bean, and the author/illustrator of the Bolivar series. In 2018, he was nominated for an Eisner Award for Bolivar. Sean graduated from Princeton University, where he met his wife, Lucy. They have two sons and live in Charlottesville, Virginia.
Loading...
or support indie stores by buying on