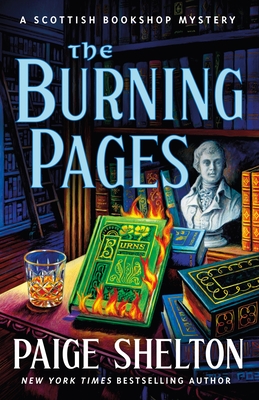 Delaney Nichols faces off against an elusive arsonist in the seventh Scottish Bookshop Mystery, The Burning Pages, from beloved author Paige Shelton....

One winter's night, bookseller Delaney Nichols and her coworker Hamlet are invited to a Burns Night dinner, a traditional Scottish celebration of the poet Robert Burns. She's perplexed by the invitation, but intrigued. The dinner takes place at Burns House itself, a tiny cottage not far from the Cracked Spine bookshop but well hidden. There, it becomes clear that Delaney and Hamlet were summoned in an attempt to make amends between Edwin, Delaney's boss, and one of the other invitees, who suspected Edwin for burning down his own bookshop twenty years ago after a professional disagreement.

But after the dinner, there’s another fire. The Burns House itself is burned to the ground, and this time there’s a body among the ruins. When Hamlet is accused of the crime, Delaney rushes to prove his innocence, only to discover that he might actually have a plausible motive...


Praise For The Burning Pages: A Scottish Bookshop Mystery…

"Filled with literary references that will tickle bibliophiles." —Kirkus Reviews on Deadly Editions