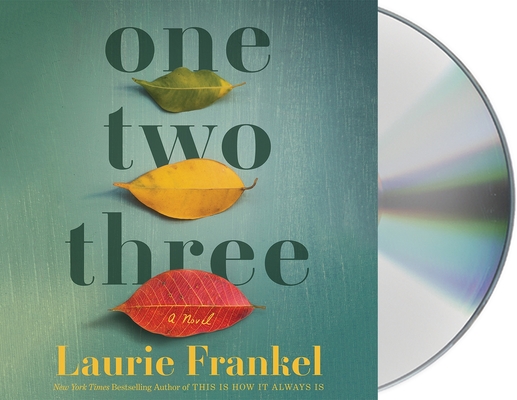 For fans of Anne Tyler, Richard Russo, Barbara Kingsolver, and Emma Straub, One Two Three is Laurie Frankel's specialty: a timely, topical novel about love and family that will make you laugh and cry...and laugh again.

Everyone knows everyone in the tiny town of Bourne. But the Mitchell sisters are especially beloved, and not just because they’re teenage triplets. Mirabel is the smartest person anyone has ever met, and no one is fooled by her wheelchair or her Voice app into thinking otherwise. Monday is the town’s purveyor of books now that the library’s closed—tell her the book you think you want, and she’ll pull the one you actually do from the microwave or her underwear drawer. Mab’s job is hardest of all: get good grades, get into college, get out of Bourne.

For a few weeks seventeen years ago, Bourne was national news when its water turned green and was declared unfit for use, but it was too late for its residents. And just when it seems life might go on the same forever, the first moving truck anyone’s seen in years pulls up. Then a new student enrolls at Bourne Memorial High. He’s smart and handsome and exciting—and the Mitchell family’s sworn enemy. And soon, in a town where nothing ever changes, suddenly everything does.

Laurie Frankel is the New York Times bestselling, award-winning author of three previous novels, The Atlas of Love, Goodbye for Now, and the Reese’s Book Club x Hello Sunshine Book Pick This Is How It Always Is. Frankel lives in Seattle with her husband, daughter, and border collie. She makes good soup.

Rebecca Soler is a film and voiceover actress who won a 2009 AudioFile Earphones Award for her narration of After by Amy Efaw. Her audiobook credits include work by authors such as Judy Blume, James Patterson and Sarah Dessen. Soler has also narrated the popular young adult series The Lunar Chronicles by Marissa Meyer. Her voice over credits include various video games, like Star Wars: The Old Republic and Red Dead Redemption and television shows such as Pokemon, Yu-Gi-Oh, and Teenage Mutant Ninja Turtles. She lives in New York City.
or support indie stores by buying on