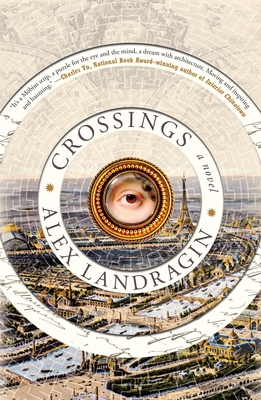 “Whoa! I am blown away by this book! A few wandering souls travel over time and space from the early 1800s to WWII in this truly unique story of love, struggle, and the desire to make things right. This book can be read two different ways: from cover to cover or in a page order mapped out at the beginning. It is a completely different reading experience depending on which way you choose. The atmosphere of Crossings is one of Sherlock Holmes written by a David Mitchell-esque character with a love for literature and Paris. This novel is beyond explanation—just read it!”
— Danica Ramgoolam, Townie Books, Crested Butte, CO
View the List

"A sparkling debut. Landragin’s seductive literary romp shines as a celebration of the act of storytelling." —Publishers Weekly

"Deft writing seduces the reader in a complex tale of pursuit, denial, and retribution moving from past to future. Highly recommended." —Library Journal (Starred Review)

Alex Landragin's Crossings is an unforgettable and explosive genre-bending debut—a novel in three parts, designed to be read in two different directions, spanning a hundred and fifty years and seven lifetimes.

On the brink of the Nazi occupation of Paris, a German-Jewish bookbinder stumbles across a manuscript called Crossings. It has three narratives, each as unlikely as the next. And the narratives can be read one of two ways: either straight through or according to an alternate chapter sequence.

The first story in Crossings is a never-before-seen ghost story by the poet Charles Baudelaire, penned for an illiterate girl. Next is a noir romance about an exiled man, modeled on Walter Benjamin, whose recurring nightmares are cured when he falls in love with a storyteller who draws him into a dangerous intrigue of rare manuscripts, police corruption, and literary societies. Finally, there are the fantastical memoirs of a woman-turned-monarch whose singular life has spanned seven generations.

With each new chapter, the stunning connections between these seemingly disparate people grow clearer and more extraordinary. Crossings is an unforgettable adventure full of love, longing and empathy.


Praise For Crossings: A Novel…


"A sparkling debut. Landragin’s seductive literary romp shines as a celebration of the act of storytelling." —Publishers Weekly

"This novel is outstanding for its sheer inventiveness. The alternative ordering of chapters creates a tension that heightens the awareness of the interlocking aspects of time and space, while deft writing seduces the reader in a complex tale of pursuit, denial, and retribution moving from past to future. Highly recommended." —Library Journal (Starred)

"A high-concept speculative adventure novel executed with intelligence and grace...an invigorating puzzle of a book that reads like a complete, intricate work of genre-defying fiction."
—Vulture

"Netflix would do well to option it immediately." —New York Times Book Review

"An exquisite novel. My initial melancholy rage at not having written it myself swiftly transformed into blissful gratitude that it exists at all, and that I am lucky enough to read it. Sure to be one of the biggest literary events of the year." —Sam J. Miller, Nebula Award Winning author of Blackfish City

"Alex Landragin has given us a deeply satisfying read!" —Dan Chaon, author of Ill Will

“Alex Landragin works a vast magician’s kit of erudite invention and heart in this enchanting debut. Crossings is a novel to savor and re-read." —Wells Tower, author of Everything Ravaged, Everything Burned

ALEX LANDRAGIN is a French-Armenian-Australian writer. Currently based in Melbourne, Australia, he has also resided in Paris, Marseille, Los Angeles, New Orleans and Charlottesville. He has previously worked as a librarian, an indigenous community worker and an author of Lonely Planet travel guides in Australia, Europe and Africa. Alex holds an MA in Creative Writing from the University of Melbourne and occasionally performs early jazz piano under the moniker Tenderloin Stomp.
Loading...
or support indie stores by buying on