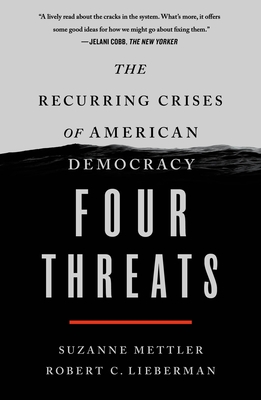 The Recurring Crises of American Democracy

"An important work of scholarship that should be read by anyone concerned with America’s future." --Fareed Zakaria, author of The Post-American World

An urgent, historically-grounded take on the four major factors that undermine American democracy, and what we can do to address them.

While many Americans despair of the current state of U.S. politics, most assume that our system of government and democracy itself are invulnerable to decay. Yet when we examine the past, we find that the United States has undergone repeated crises of democracy, from the earliest days of the republic to the present.

In Four Threats, Suzanne Mettler and Robert C. Lieberman explore five moments in history when democracy in the U.S. was under siege: the 1790s, the Civil War, the Gilded Age, the Depression, and Watergate. These episodes risked profound—even fatal—damage to the American democratic experiment. From this history, four distinct characteristics of disruption emerge. Political polarization, racism and nativism, economic inequality, and excessive executive power—alone or in combination—have threatened the survival of the republic, but it has survived—so far. What is unique, and alarming, about the present moment in American politics is that all four conditions exist.

This convergence marks the contemporary era as a grave moment for democracy. But history provides a valuable repository from which we can draw lessons about how democracy was eventually strengthened—or weakened—in the past. By revisiting how earlier generations of Americans faced threats to the principles enshrined in the Constitution, we can see the promise and the peril that have led us to today and chart a path toward repairing our civic fabric and renewing democracy.


Praise For Four Threats: The Recurring Crises of American Democracy…

“And yet, for the gravity of its subject matter, Four Threats is a lively read about the cracks in the system. What’s more, it offers some good ideas for how we might go about fixing them.” -- Jelani Cobb, The New Yorker

"Mettler and Lieberman marshal a wealth of evidence to make their case, and incisively sketch the factors at play in each historical period. Bracing, well-informed history." -- Publishers Weekly

"In an analysis deeply rooted in American history and animated by an unshakable commitment to democratic values, Mettler and Lieberman issue a cry of political alarm that privileges illumination over hysteria and reminds us that this is not the first time our nation has struggled with demons. Their eloquent call for political and social renewal allies realism with hope, and it could not be more timely.” -- E. J. Dionne, Jr., author of Code Red and co-author of One Nation After Trump

"A rich and textured account of American history through which to understand where we are today. When you finish this book, you'll be neither complacent nor despairing. But you'll be more ready to act intelligently to deal with the challenges we face." --William Kristol, director, Defending Democracy Together

“This is a masterful account of the long arc of American democracy. Long simmering historical threats have today converged leaving our current predicament deeply perilous. We recommend this book to all citizens concerned about the fate of American democracy.” --Steven Levitsky and Daniel Ziblatt, bestselling authors of How Democracies Die

“Four Threats is a sobering and instructive read. It is also a call to action to all those who would put country over party, democracy over ideology. Mettler and Lieberman rely on both history -- vividly told -- and political science to demonstrate precisely what is at stake for the future of the American experiment.” --Anne-Marie Slaughter, CEO, New America

“This is an important work of scholarship that should be read by anyone concerned with America’s future. Deeply grounded in five pivotal moments in history, the authors make a compelling case that we are now living through the most consequential of these tests of American democracy. Forces that have existed throughout American history, and have waxed and waned over the years, have all come together to present the United States with an existential challenge. How we come out of this will shape the country’s character for decades to come.” --Fareed Zakaria, author of The Post-American World

Suzanne Mettler is the John L. Senior Professor of American Institutions in the Government Department at Cornell University. She is the author of several books, including The Government-Citizen Disconnect; Degrees of Inequality: How The Politics of Higher Education Sabotaged the American Dream; and The Submerged State: How Invisible Government Programs Undermine American Democracy. She is the recipient of a Guggenheim Fellowship, a Radcliffe Institute Fellowship, and several book awards. In 2017, she was elected to the American Academy of Arts and Sciences.

Robert C. Lieberman is Krieger-Eisenhower Professor of Political Science at the Johns Hopkins University. He is the author of the award-winning books Shifting the Color Line: Race and the American Welfare State and Shaping Race Policy: The United States in Comparative Perspective, and has written about American politics for Foreign Affairs. He has received fellowships from the Russell Sage Foundation and the American Philosophical Society. He previously served as provost of the Johns Hopkins University and as dean of Columbia University’s School of International and Public Affairs.
Loading...
or support indie stores by buying on