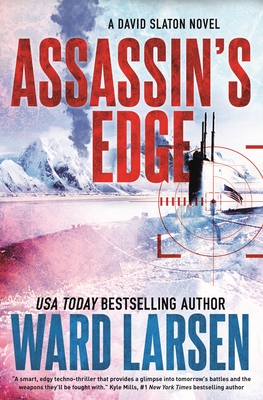 A U.S. spy plane crashes off the northern coast of Russia at the same time that a Mossad operative is abducted from a street in Kazakhstan. The two events seem unrelated, but as suspicions rise, the CIA calls in its premier operative, David Slaton.

When wreckage from the aircraft is discovered on a remote Arctic island, Slaton and a team are sent on a clandestine mission to investigate. While they comb a frigid Russian island at the top of the world, disaster strikes yet again: a U.S. Navy destroyer sinks in the Black Sea.

Evidence begins mounting that these disparate events are linked, controlled by an unseen hand. A mysterious source, code name Lazarus, provides tantalizing clues about another impending strike. Yet Lazarus has an agenda that is deeply personal, a thirst for revenge against a handful of clandestine operators. Prime among them: David Slaton.

“It's always a pleasure to read an author who knows his stuff. With Assassin's Edge, Larsen has created a smart, edgy techno-thriller that provides a glimpse into tomorrow's battles and the weapons they'll be fought with.” —Kyle Mills, #1 New York Times bestselling author


Praise for the David Slaton series

Ward Larsen is a USA Today bestselling author, and seven-time winner of the Florida Book Award. His first thriller, The Perfect Assassin, has been optioned for film by Amber Entertainment. He has also been nominated for the Macavity and Silver Falchion Awards. A former U.S. Air Force fighter pilot, Larsen has served as a federal law enforcement officer, airline captain, and is a trained aircraft accident investigator.
Loading...
or support indie stores by buying on