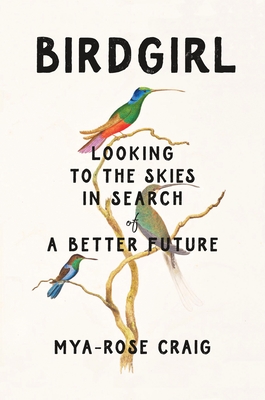 Looking to the Skies in Search of a Better Future

Birder, environmentalist and activist Mya-Rose Craig is an international force. In her moving memoir, Birdgirl, she chronicles her mother’s struggle with mental illness, and shares her passion for social justice and fierce dedication to preserving our planet.

Meet Mya-Rose – otherwise known as “Birdgirl.” In her words: “Birdwatching has never felt like a hobby, or a pastime I can pick up and put down, but a thread running through the pattern of my life, so tightly woven in that there’s no way of pulling it free and leaving the rest of my life intact.”

Birdgirl follows Mya-Rose and her family as they travel the world in search of rare birds and astonishing landscapes. But a shadow moves with them, too—her mother's deepening mental health crisis. In the face of this struggle, the Craigs turn to nature again and again for comfort and meaning.

Each bird they see brings a moment of joy and reflection, instilling in Mya-Rose a deep love of the natural world. But Mya-Rose has also seen first-hand the reckless destruction we are inflicting on our fragile planet, as well as the pervasive racism infecting every corner of the world, leading her to campaign for Black, Indigenous, people of color.

Joining the fight of today's young environmental activists, Mya-Rose shares her experiences to advocate for the simple, profound gift of nature, and for making it accessible to all, calling her readers to rediscover the power of our natural world.
Birder, activist, daughter: this is her story.

Mya-Rose Craig, also known as Birdgirl, is a 20-year-old British-Bangladeshi birder, environmentalist, and diversity activist. She campaigns for equal access to nature and to end the climate and biodiversity loss crises, issues which she believes are intrinsically linked, while promoting Global Climate Justice. She also fights for the rights of indigenous peoples, is an Ambassador for Survival International and has previously written a book in the UK amplifying their voices.
At age fourteen she founded Black2Nature to engage teenagers of color with nature and at seventeen she became the youngest Briton to receive an honorary Doctorate, awarded by Bristol University for this pioneering work. Also at seventeen she became the youngest person to see half the world's bird species and shared a stage with Greta Thunberg, speaking to 40,000 protestors. In September 2020 she held the world's most northerly Youth Strike, traveling with Greenpeace, for whom she is an Oceans' Ambassador, to the melting pack ice of the high Arctic.