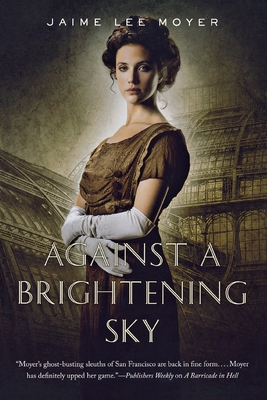 Against a Brightening Sky

By 1919 the Great War has ended, peace talks are under way in Paris, and the world has been forever changed. Delia Martin, apprentice practitioner of magical arts, and her husband, Police Captain Gabriel Ryan, face the greatest challenge of their lives when fragments from the war descend on San Francisco.

As Delia prepares to meet friends at a St. Patrick's Day parade, the strange ghost of a European princess appears in her mirror. Her pleasant outing becomes a nightmare as the ghost reappears moments after a riot starts, warning her as a rooftop gunman begins shooting into the crowd. Delia rushes to get her friends to safety, and Gabe struggles to stop the killing-and to save himself. Delia and Gabe realize all the chaos and bloodshed had one purpose-to flush Alina from hiding, a young woman with no memory of anything but her name. As Delia works to discover how the princess ghost's secrets connect to this mysterious young woman, and Gabe tracks a ruthless killer around his city, they find all the answers hinge on two questions: Who is Alina...and why can't she remember? Against a Brightening Sky is the thrilling conclusion to Jaime Lee Moyer's glittering historical fantasy series.

JAIME LEE MOYER's Delia's Shadow won the 2009 Columbus Literary Award for Fiction. Moyer has sold short fiction to Lone Star Stories, Daily Science Fiction, and to the Triangulations: End of the Rainbow, and Triangulations: Last Contact anthologies, and edited the 2010 Rhysling Award Anthology for the Science Fiction Poetry Association. Moyer lives in San Antonio with three cats, three guitars, and a growing collection of books and music.
Loading...
or support indie stores by buying on