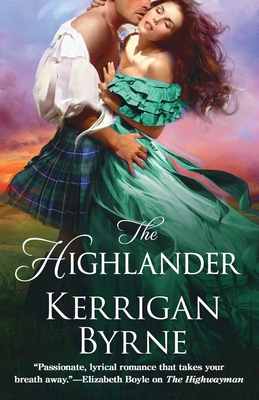 In The Highlander, a stunning, gorgeous Victorian romance from Kerrigan Byrne, can the fiercest master of battle conquer a woman’s heart?
They call him the Demon Highlander. The fearsome Lieutenant Colonel Liam MacKenzie is known for his superhuman strength, towering presence, and fiery passion in the heat of battle. As Laird to the MacKenzie clan, the undefeated Marquess has vanquished his foes with all rage and wrath of his barbaric Highland ancestors. But when an English governess arrives to care for his children, the master of war finds himself up against his greatest opponent. . . in the game of love.

Defying all expectations, Miss Philomena is no plain-faced spinster but a ravishing beauty with voluptuous curves and haughty full lips that rattle the Laird to his core. Unintimidated by her master’s raw masculinity and savage ways, the headstrong lass manages to tame not only his wild children but the beast in his soul. With each passing day, Liam grows fonder of Miss Mena—and more suspicious. What secret is she hiding behind those emerald eyes? What darkness brought her to his keep? And how can he conquer this magnificent woman’s heart . . . without surrendering his own?

“Romantic, lush, and suspenseful.” —Suzanne Enoch on The Highwayman


Praise For The Highlander (Victorian Rebels #3)…

"Another hit from the phenomenal Byrne." - Library Journal Starred Review on The Highlander

"A rich, emotional love story." - The Washington Post on The Highlander

Captured me from page one and never let go. Romantic, lush, and suspenseful. —Suzanne Enoch, New York Times bestselling author on The Highwayman

A passionate, lyrical romance that takes your breath away. From the first page, you'll fall in love. —Elizabeth Boyle, New York Times Bestseller

The romance is raw, edgy and explosive...the path they take through adversity makes the triumph of love deeply satisfying. —PW on The Highwayman