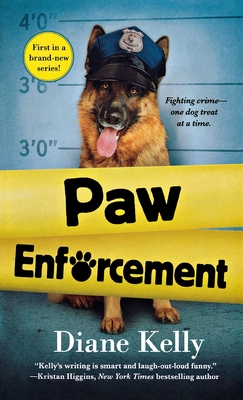 Paw Enforcement introduces police officer Megan Luz and her loyal K-9 partner Brigit-two Fort Worth cops who are worth their weight in kibble.

SHE'S ON A SHORT LEASH.
Officer Luz is lucky she still has a job after tasering a male colleague where it counts the most. Sure, he had it coming-which is why the police chief is giving Megan a second chance. The catch? Her new partner can't carry a gun, can't drive a cruiser, and can't recite the Miranda Rights. Because her new partner is a big furry police dog. So that's what the chief meant when he called Megan's partner a real b*tch...
WILL FATE THROW HER A BONE?
With Brigit out on the beat, Megan is writing up enough tickets to wallpaper the whole station. But when a bomb goes off at the mall's food court, it's up to Megan and Brigit to start digging-and sniffing-for clues. With the help of dead-sexy bomb-squad expert Seth Rutledge and his own canine partner named Blast, Megan finds herself in a desperate race to collar a killer. Will justice be served-or will she end up in the doghouse?

"Readers should be prepared for a laugh fest. Diane Kelly is first class."-Night Owl Romance

Diane Kelly is a former CPA and tax attorney, who had several brushes with white-collar criminals during her career. When she realized her experiences made excellent fodder for novels, her fingers hit the keyboard and thus began her Special Agent Tara Holloway romantic mystery series. A recipient of the 2009 Romance Writers of America Golden Heart Award for Best Novel with Strong Romantic Elements, she has received more than two dozen RWA chapter awards. Diane's fiction, tax, and humor pieces have appeared in True Love Magazine, Writer's Digest Yearbook, Romance Writers Report, Byline Magazine, and other publications.
Loading...
or support indie stores by buying on