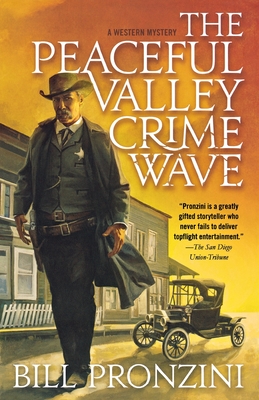 Bill Pronzini's riveting western mystery, The Peaceful Valley Crime Wave, takes on the modern world with old-fashioned violence--and his Peaceful Valley is anything but...

Nothing much happens in Peaceful Valley, Montana. And that's just how Sheriff Lucas Monk likes it. Aside from the occasional drunken brawl or minor disturbance out on the reservation, he hasn't had to resort to his fists or sidearm in years. That is, until mid-October, 1914, when the theft of a wooden cigar store Indian sets off a crime wave like nothing Lucas has ever seen. Teenager Charity Axthelm goes missing, Reba Purvis's housekeeper is poisoned with cyanide Reba is sure was meant for her, and Lucas's gut tells him that this is only the beginning. It's not long before the first corpse shows up, bringing the peace in the valley to a thundering end.

BILL PRONZINI has been nominated for, or won, every prize offered to crime fiction writers, including the Grand Master Award from the Mystery Writers of America. It is no wonder, then, that the Detroit Free Press said of him, It's always nice to see masters at work. Pronzini's clear style seamlessly weaves [storylines] together, turning them into a quick, compelling read. He lives and writes in California, with his wife, crime novelist Marcia Muller. Pronzini's books include the Nameless Detective series, the longest-running private investigator series in print.
Loading...
or support indie stores by buying on