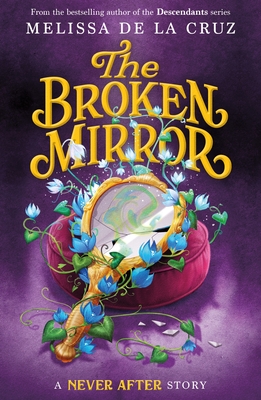 The Broken Mirror (The Chronicles of Never After #3)

“I loved this storyline and the continued adventure of Filomena and her friends! The way the story unfolds is masterful and kept me reading to see what happens next. I can’t wait for the next book!”
— Donna Powers, McLean & Eakin Booksellers, Petoskey, MI
View the List

Real life and fairy tales collide in Never After: The Broken Mirror, book three of the funny and thrilling middle-grade saga perfect for fans of The Land of Stories series from the #1 New York Times bestselling creator of the Descendants, Melissa de la Cruz.

The Never After crew is back for another twisted adventure. This time, they’re off to Snow Country—that is, after they rescue the beleaguered Lord Sharif of Nottingham from the evil Robin Hood, who has been plaguing the land with his thievery and mischief.

But Robin’s antics aren’t the only dangers afoot in the Kingdom of Never After. At the behest of her daughter, the evil Cinderella, Queen Olga has turned Prince Charming into a Frog after his wedding to the beautiful Hortense. And how could we forget the ominous Prophecy, which still looms large over Filomena and her friends?

Along with Jack, Alistair, Gretel, Beatrice, Byron Bessley, and some new Snow Country pals like Rose Red and a chatty magic mirror, Filomena sets off to find the only ones who can save the kingdom once and for all: The League of the Seven – a group of fearless warriors devoted to fighting the ogres at any cost.

Still, new threats lurk around every corner, both in Never After and back home in North Pasadena . . . Even with the League of the Seven’s help, can Filomena and her friends rescue the land from Olga’s clutches? Or will the ogres finally prevail?


Praise For Never After: The Broken Mirror (The Chronicles of Never After #3)…

*An Amazon Best Book of the Month!*

"This third series installment offers more action-filled heroic quests...Alongside the magical fun there is emotional depth as Filomena and Jack struggle with acting courageously and also allowing themselves to share their true feelings of fear, loneliness, and helplessness. Another absorbing fairy-tale adventure." - Kirkus Reviews

MELISSA DE LA CRUZ is the #1 New York Times, #1 Publisher’s Weekly and #1 Indie Bound bestselling author of many critically acclaimed and award-winning novels for readers of all ages, and edited the inspiring anthology of true stories, Because I Was a Girl. She grew up in Manila and moved to San Francisco with her family, where she graduated high school salutatorian from The Convent of the Sacred Heart. At Columbia University, she majored in art history and English. Melissa de la Cruz lives in West Hollywood with her husband and daughter.
Loading...
or support indie stores by buying on