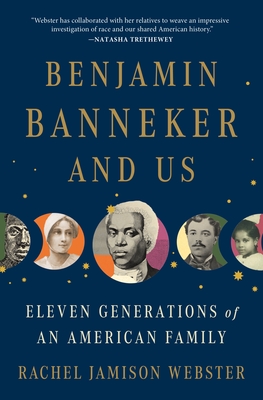 Benjamin Banneker and Us

Eleven Generations of an American Family

A family reunion gives way to an unforgettable genealogical quest as relatives reconnect across lines of color, culture, and time, putting the past into urgent conversation with the present.

In 1791, Thomas Jefferson hired a Black man to help survey Washington, DC. That man was Benjamin Banneker, an African American mathematician, a writer of almanacs, and one of the greatest astronomers of his generation. Banneker then wrote what would become a famous letter to Jefferson, imploring the new president to examine his hypocrisy, as someone who claimed to love liberty yet was an enslaver. More than two centuries later, Rachel Jamison Webster, an ostensibly white woman, learns that this groundbreaking Black forefather is also her distant relative.

Acting as a storyteller, Webster draws on oral history and conversations with her DNA cousins to imagine the lives of their shared ancestors across eleven generations, among them Banneker’s grandparents, an interracial couple who broke the law to marry when America was still a conglomerate of colonies under British rule. These stories shed light on the legal construction of race and display the brilliance and resistance of early African Americans in the face of increasingly unjust laws, some of which are still in effect in the present day.


Praise For Benjamin Banneker and Us: Eleven Generations of an American Family…

"Rachel Jamison Webster has collaborated with her relatives to weave an impressive investigation of race and our shared American history—the convergences and divergences across time and space. Webster tells a compelling story as she examines ancestry, DNA, passing, and cultural appropriation, resulting in a resonant addition to our current national reckoning around racial justice."
—Natasha Trethewey, Pulitzer Prize Winner, Former U.S. Poet Laureate, and author of Memorial Drive: A Daughter’s Memoir

"For America to outgrow the bondage of white-body supremacy, white Americans need to imagine themselves in Black, red and brown bodies, and experience what those bodies had to endure. They also need to do the same with the bodies of their white ancestors. Benjamin Banneker and Us undertakes this work of imagination, research and listening, and is written in the spirit of healing.”
—Resmaa Menakem, New York Times bestselling author of My Grandmother’s Hands: Racialized Trauma and the Pathway to Mending Our Hearts and Bodies

"Benjamin Banneker and Us not only tells the story of Banneker but gives the reader a portrait of the women who shaped him—his mother, grandmother and sisters. These women stood up in court to argue for their children’s freedom, served as midwives and herbalists, and found ways to survive and thrive in a country that continually tried to silence them. I am inspired by this family’s resilience, and by the way their lives illuminate the past and our present. "
—Anna Malaika Tubbs, New York Times bestselling author of The Three Mothers: How the Mothers of Martin Luther King, Jr., Malcolm X, and James Baldwin Shaped a Nation

"Benjamin Banneker and Us beautifully weaves the past and present, fact and imagination, ancestors and the living. In telling the story of this extraordinary Black intellectual, Rachel Jamison Webster chronicles the construction of race in North America, exposing the damage to humanity that it has inflicted upon us all and demonstrating a bumpy, muddy path toward repair. The story is one of resilience, courage, and brilliance and the telling is a masterful display of hope."
—Jacqueline Battalora, author of Birth of A White Nation: The Invention of White People and its Relevance Today, 2nd ed.

"Drawing on her acute sensitivity to language and bias, sharing long discussions with her cousins, and meshing their family history with the brutal realities of Banneker's time, Webster has created an engrossing, multifaceted, profoundly thoughtful, and beautifully rendered inquiry that forms a clarifying lens on America’s ongoing struggles against racism and endemic injustice."
—Booklist, Starred Review

"When untold secrets straddle the color line as found in Rachel Jamison Webster’s family, she meets the responsibility owed to both sides to voice these narratives. Webster’s skillfully written exposition flows like the mighty river that her ancestors crossed into Ohio to pursue a life of free persons of color. More than a sterile genealogical odyssey, it is a refreshingly humanizing story of early mixed-race America that will touch our hearts while expanding our appreciation for the foundation of one of the most confounding complexities surrounding race in this country."
—Ric S. Sheffield, author of We Got By: A Black Family’s Journey in the Heartland

"Benjamin Banneker, a Black American whose genius and contributions to science, civil rights, and the nation’s history are little known beyond Baltimore, his birthplace, and Washington, DC, the city he helped survey, is finally getting his due. Spanning several generations and three continents, this engaging and insightful narrative is made even more compelling because the author, a descendant of Banneker’s, is white."
—Gayle Jessup White, author of Reclamation: Sally Hemings, Thomas Jefferson, and a Descendant's Search for Her Family's Lasting Legacy

Rachel Webster is a professor of creative writing at Northwestern University and the author of four books of poetry and cross-genre writing. She has taught writing workshops through the National Urban League, Chicago Public Schools, Gallery 37, and the Pacific Northwest College of Art, working to bring diversity and antiracist awareness into creative writing curricula. Rachel’s essays, poems, and stories have been published in outlets including Poetry, Tin House, and the Yale Review. Benjamin Banneker and Us is her first nonfiction book. She lives in Evanston, Illinois, with her husband and daughter.
Loading...
or support indie stores by buying on