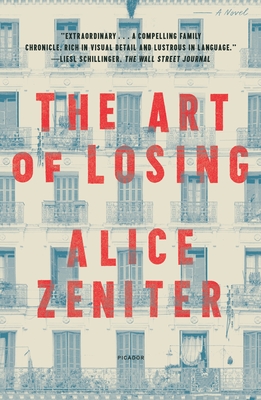 The Art of Losing

Across three generations, three wars, two continents, and the mythic waters of the Mediterranean, one family’s history leads to an inevitable question: What price do our descendants pay for the choices that we make?

Naïma knows Algeria only by the artifacts she encounters in her grandparents’ tiny apartment in Normandy: the language her grandmother speaks but Naïma can’t understand, the food her grandmother cooks, and the precious things her grandmother carried when they fled. Naïma’s father claims to remember nothing; he has made himself French. Her grandfather died before he could tell her his side of the story. But now Naïma will travel to Algeria to see for herself what was left behind—including their secrets.

The Algerian War for Independence sent Naïma’s grandfather on a journey of his own, from wealthy olive grove owner and respected veteran of the First World War, to refugee spurned as a harki by his fellow Algerians in the transit camps of southern France, to immigrant barely scratching out a living in the north. The long battle against colonial rule broke apart communities, opened deep rifts within families, and saw the whims of those in even temporary power instantly overturn the lives of ordinary people. Where does Naïma’s family fit into this history? How do they fit into France’s future?

Alice Zeniter’s The Art of Losing is a powerful, moving family novel that spans three generations across seventy years and two shores of the Mediterranean Sea. It is a resonant people’s history of Algeria and its diaspora. It is a story of how we carry on in the face of loss: loss of country, identity, language, connection. Most of all, it is an immersive, riveting excavation of the inescapable legacies of colonialism, immigration, family, and war.


Praise For The Art of Losing: A Novel…

A Most Anticipated Book of 2021: The Millions, The New York Times' "Globetrotting"
Winner of the Prix Goncourt des Lycéens
Winner of Le Monde's Literary Prize
A Sunday Times Translated Book of the Month Pick

"Ms. Zeniter’s extraordinary achievement is to transform a complicated conflict into a compelling family chronicle, rich in visual detail and lustrous in language. Her storytelling, splendidly translated by Frank Wynne, carries the reader through different generations, cities, cultures, and mindsets without breaking its spell... With The Art of Losing, Ms. Zeniter shows fiction’s power as a hedge against loss of the past: the art of regaining."
—The Wall Street Journal

"Remarkable... superbly handled… It speaks urgently to our times.”
—The Sunday Times

"Visceral... An incredible [book]... that requires rapt attention. It is a novel that scales the walls of history and excavates lessons with curiosity and anger."
—The Observer

"This pacy, complex piece of historical fiction... explores the tangled reality of identity."
—The New Statesman

"France, like Britain, hardly lacks for migrant fictions now, but Zeniter traces their lonely passage exceptionally well. Her fine-grained scenes unroll into a grander historical canvas. The translator Frank Wynne, in another stellar outing, stylishly catches both her intimate and epic notes... With its panoramic vision and generous spirit, The Art of Losing finds shoots of hope amid the stony landscapes of the past."
—The Spectator

“Absorbing… as Chimamanda Adichie did in Half of a Yellow Sun, and Yvonne Adhiambo Owuor with Dust, Alice Zeniter joins the ranks of these authors in filling silences, whether individual or collective.”
—The East African

“Both a classic tale of the immigrant experience and a meditation on how that experience reverberates through generations of a family.”
—Booklist, starred review

“In Zeniter’s ruminative latest (after Take This Man), a French Algerian woman unearths her shrouded family history and reckons with the question of what constitutes a homeland. … Zeniter skillfully demonstrates the impact of colonialism on family, country, and the historical archive. With nuance and grace, this meditative novel adds to the understanding of a complex, uncomfortable era of French history.”
—Publishers Weekly

“The best book I read in 2020 . . . Through this masterful novel, [Alice Zeniter] created space for thinking through nations, politics, family, love and transmissions, while bringing some much-needed nuance and humanity to this period of our recent history.”
—Bad Form

“The Art of Losing is an exceptional novel, a masterful meditation on the negative space of history. With surgical control and deep emotional precision, Alice Zeniter tells the story of a family at once severed from and forever tethered to its past, survivors of colonialism’s residual wreckage. There is about this book the sense of literature’s great upending power, a brilliant light cast on the lives of those who, in the grand current of geopolitics, would otherwise be confined to shadows.”
—Omar El Akkad, author of American War

“A captivating exploration of the unspoken stories of the Algerian War.”
—Jean Birnmaum, Le Monde

“It is impossible not to be hit right in the heart.”
—Laurence Caracalla, Le Figaro Magazine

“A story that has never before been told.”
—Anne Haeming, Der Spiegel

“A powerful family saga . . . [Alice Zeniter] shows how history is passed down from generation to generation, in stories pockmarked by what’s left unsaid.”
—Elisabeth Philippe, L’Obs

“A deeply human story about the specters of identity and decolonization.”
—Vanity Fair (France)

“A masterfully conceived and brilliantly written chronicle that distills the tensions on both sides of the Mediterranean into a timely family saga.”
—Dirk Fuhrig, Deutschlandfunk Kultur

Alice Zeniter is a French novelist, translator, screenwriter, and director. Her novel Take This Man was published in English by Europa Editions in 2011. Zeniter has won many awards in France for her work, including the Prix littéraire de la Porte Dorée, the Prix Renaudot des Lycéens, and the Prix Goncourt des Lycéens, which was awarded to The Art of Losing. She lives in Brittany.

Frank Wynne has translated the work of numerous French and Hispanic authors, including Michel Houellebecq, Patrick Modiano, Javier Cercas, and Virginie Despentes. His work has earned him many prizes, including the Scott Moncrieff Prize, the Premio Valle Inclán, and the IMPAC Dublin Literary Award with Houellebecq for The Elementary Particles. Most recently, his translation of Jean-Baptiste Del Amo’s Animalia won the 2020 Republic of Consciousness Prize.
Loading...
or support indie stores by buying on