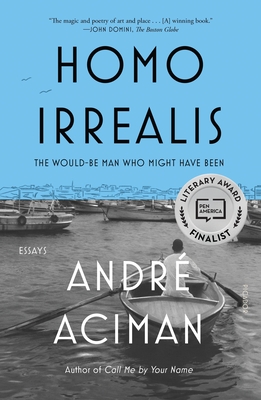 The New York Times–bestselling author of Find Me and Call Me by Your Name returns to the essay form with his collection of thoughts on time, the creative mind, and great lives and works.

Irrealis moods are a category of verbal moods that indicate that certain events have not happened, may never happen, or should or must or are indeed desired to happen, but for which there is no indication that they will ever happen. Irrealis moods are also known as counterfactual moods and include the conditional, the subjunctive, the optative, and the imperative—all best expressed in this book as the might-be and the might-have-been.

One of the great prose stylists of his generation, André Aciman returns to the essay form in Homo Irrealis to explore what time means to artists who cannot grasp life in the present. Irrealis moods are not about the present or the past or the future; they are about what might have been but never was but could in theory still happen. From meditations on subway poetry and the temporal resonances of an empty Italian street to considerations of the lives and work of Sigmund Freud, C. P. Cavafy, W. G. Sebald, John Sloan, Éric Rohmer, Marcel Proust, and Fernando Pessoa and portraits of cities such as Alexandria and St. Petersburg, Homo Irrealis is a deep reflection on the imagination’s power to forge a zone outside of time’s intractable hold.


Praise For Homo Irrealis: The Would-Be Man Who Might Have Been…

“[These] essays made me come fully alive, as good literature does, in a way that intensified my senses . . . I swallowed Homo Irrealis in two massive gulps, pausing only to catch my breath.” —Sukhada Tatke, The Rumpus

“Magic . . . This winning book may salute the arts for how they ‘aren’t quite there,’ but in many ways, guileful and touching, it embodies its maker and how he was all there.” —John Domini, The Boston Globe

“[A]s makers and viewers of art—as humans—we seek out the mood and sensation of the irrealis because we find deep pleasure in it despite the pain it also brings. Aciman succeeds in delivering that pleasure again and again . . . By daring to call forth the irrealis mood, to summon what we usually skitter around and stumble upon, Aciman sets the mood—incurring the awkwardness of doing so, and giving us the chance to realize something that might take a long time to understand.” —Hannah Shea, Ploughshares

“In Homo Irrealis Aciman patiently works out an algorithm about love, memory, and desire . . . The result can be summed up in one word: bliss.” —David Mikics, Tablet