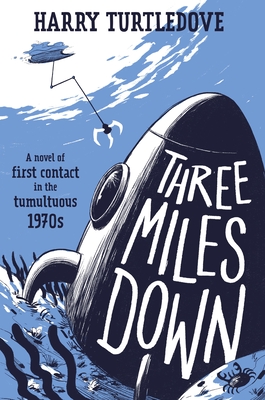 From New York Times bestselling author Harry Turtledove, the modern master of alternate history, a novel of alien contact set in the tumultuous year of the Watergate scandal.

It's 1974, and Jerry Stieglitz is a grad student in marine biology at UCLA with a side gig selling short stories to science fiction magazines, just weeks away from marrying his longtime fiancée. Then his life is upended by grim-faced men from three-letter agencies who want him to join a top-secret "Project Azorian" in the middle of the north Pacific Ocean—and they really don't take "no" for an answer. Further, they're offering enough money to solve all of his immediate problems.

Joining up and swearing to secrecy, what he first learns is that Project Azorian is secretly trying to raise a sunken Russian submarine, while pretending to be harvesting undersea manganese nodules. But the dead Russian sub, while real, turns out to be a cover story as well. What's down on the ocean floor next to it is the thing that killed the sub: an alien spacecraft.

Jerry's a scientist, a longhair, a storyteller, a dreamer. He stands out like a sore thumb on the Glomar Explorer, a ship full of CIA operatives, RAND Corporation eggheads, and roustabout divers. But it turns out that he's the one person in the North Pacific who's truly thought out all the ways that human-alien first contact might go.

And meanwhile, it's still 1974 back on the mainland. Richard Nixon is drinking heavily and talking to the paintings on the White House walls. The USA is changing fast—and who knows what will happen when this story gets out? Three Miles Down is both a fresh and original take on First Contact, and a hugely enjoyable romp through the pop culture, political tumult, and conspiracies-within-conspiracies atmosphere that was 1974.

Harry Turtledove (he/him) is an American fantasy and science fiction writer who Publishers Weekly has called the "Master of Alternate History." He has received numerous awards and distinctions, including the Hugo Award for Best Novella, the HOMer Award for Short story, and the John Esthen Cook Award for Southern Fiction. Turtledove’s works include the Crosstime Traffic, Worldwar, Darkness, and Opening of the World series; the standalone novels The House of Daniel, Fort Pillow, and Give Me Back My Legions!; and over a dozen short stories available on Tor.com. He lives in Los Angeles with his wife, novelist Laura Frankos, and their four daughters.
Loading...
or support indie stores by buying on