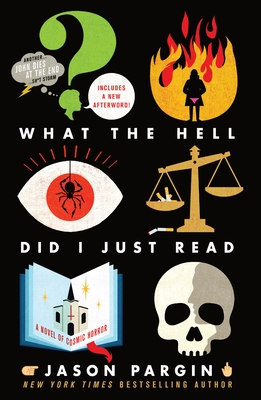 What the Hell Did I Just Read

John Dies at the End's "smart take on fear manages to tap into readers' existential dread on one page, then have them laughing the next" (Publishers Weekly) and This Book is Full of Spiders was "unlike any other book of the genre" (Washington Post).

Now, New York Times bestselling author Jason Pargin is back with What the Hell Did I Just Read, the third installment of this black-humored thriller series.

While investigating a fairly straightforward case of a shape-shifting interdimensional child predator, Dave, John, and Amy realized there might actually be something weird going on. Together, they navigate a diabolically convoluted maze of illusions, lies, and their own incompetence in an attempt to uncover a terrible truth they -- like you -- would be better off not knowing.


Praise For What the Hell Did I Just Read: A Novel of Cosmic Horror (John Dies at the End #3)…

"[Pargin's] wildly mind-bending third installment (after This Book Is Full of Spiders) of the adventures of protagonist David Wong is filled with the humorous horror readers have come to expect.... While the story gleefully wallows in absurdity, thoughtful themes of addiction, perception, and the drive to do the right thing quickly emerge beneath the vivid and convoluted imagery. The plot’s rapid pace holds the reader’s attention to the truly bitter end." —Publishers Weekly (starred review)

"[Jason Pargin] burst onto the horror-comedy scene with his phantasmagorical novel John Dies at the End and has been steadily ratcheting up the madness ever since.... A frenetic, welcome return to Dave and John's grotesque but funny grindhouse nightmare." —Kirkus Reviews

"Introduced in John Dies at the End and last seen in This Book Is Full of Spiders, [Pargin's] irreverent protagonists return in another action-packed horror adventure full of crude but effective humor. For fans of the humor website Cracked.com." —Library Journal


Praise for This Book is Full of Spiders:

“Kevin Smith's Clerks meets H.P. Lovecraft in this exceptional thriller that makes zombies relevant again... From the dialogue to the descriptions, lines are delivered with faultless timing and wit... [Jason Pargin] is a fantastic author with a supernatural talent for humor. If you want a poignant, laugh-out-loud funny, disturbing, ridiculous, self-aware, socially relevant horror novel than This Book is Full of Spiders: Seriously Dude, Don't Touch It is the one and only book for you.” —SF Signal

“The comedic and crackling dialogue also brings a whimsical flair to the story, making it seem like an episode of AMC's The Walking Dead written by Douglas Adams of The Hitchhiker's Guide to the Galaxy. ...Imagine a mentally ill narrator describing the zombie apocalypse while drunk, and the end result is unlike any other book of the genre. Seriously, dude, touch it and read it.” —Washington Post

“One of the great things about discovering new writers, especially in the narrow range of hybrid-genre comedic novels, is realizing that they're having just as much fun making this stuff up as you are reading it. Sitting squarely with the likes of S.G. Browne and Christopher Moore, [Jason Pargin] must be pissing himself laughing at his own writing, even as he's giving fans an even funnier, tighter and justifiably insane entry in the series.” —Kirkus


Praise for John Dies at the End:

“...strikes enough of a balance between hilarity, horror, and surrealism here to keep anyone glued to the story.” —Booklist

JASON PARGIN is the New York Times bestselling author of the John Dies at the End series as well as the award-winning Zoey Ashe novels. He previously published under the pseudonym David Wong. His essays at Cracked.com and other outlets have been enjoyed by tens of millions of readers around the world.

DAVID WONG is the pseudonym of Jason Pargin, New York Times bestselling author of the John Dies at the End series as well as the award-winning Zoey Ashe novels. He previously published under the pseudonym David Wong. His essays at Cracked.com and other outlets have been enjoyed by tens of millions of readers around the world.
Loading...
or support indie stores by buying on