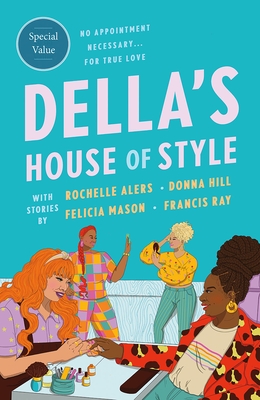 Specializing in Cuts, Weaves, Manicures, Pedicures. . . and Passion. Della's House of Style is back at an attractive $9.99 price!

Rochelle Alers' Sweet Surrender
Manicurist Maria Parker can't help but notice when a hunky financial planner brings his niece into Della's for a manicure. And when he starts to frequent the salon himself for manicures from Maria, she's pretty sure he has more than cuticles on his mind...

Donna Hill's It Could Happen to You
When Della turned Rosie's Curl and Weave into Della's House of Style, a few things managed to slip through the cracks—and now she's under fire by the IRS. When a by-the-book IRS agent comes to investigate, Della is infuriated by his presence in the salon—and reluctant to admit that she's growing more than a little used to it...

Felicia Mason's Truly, Honestly
High-maintenance investment banker Sheila needs some serious pampering. On a whim, she decides to get a shoulder-length weave at Della's House of Style, and afterwards visits the salon's lounge, where a sexy D.J. has a song in mind for her...

Francis Ray's A Matter of Trust
Single mother Hope Lassiter, once a critically acclaimed actress, is now a cosmetologist at Della's House of Style. When a handsome director tries to woo her back to the stage, Hope has to wonder if his intentions are more than professional...

Donna Hill, author of books including Divas, Inc. and In My Bedroom, lives in Brooklyn, New York. She has more than fifty published titles to her credit, three of which (Intimate Betrayal, Masquerade, A Private Affair) were adapted for television. She has been featured in Essence, the Daily News, USA Today, Today's Black Woman, and Black Enterprise, among many others.

Rochelle Alers is the author of over eighty books and winner of the Romantic Times Career Achievement Award and Zora Neale Hurston Literary Award, among others. She is one of the most prolific and popular African American authors of romance and women's fiction, making regular appearances on the Essence bestseller lists. Her books include the Hideaway series and the Blackstones of Virginia series. Alers lives in Long Island, New York.

Felicia Mason is a journalist and add award-winning romance novelist with mroe than ten novels and countless novellas to her name. Her book Rhapsody was adapted for film.

Francis Ray (1944-2013) is the New York Times bestselling author of the Grayson novels, the Falcon books, the Taggart Brothers, and Twice the Temptation, among many other books. Her novel Incognito was made into a movie aired on BET. A native Texan, she was a graduate of Texas Woman's University and had a degree in nursing. Besides a writer, she was a school nurse practitioner with the Dallas Independent School District. She lived in Dallas. "Francis Ray is, without a doubt, one of the Queens of Romance." --Romance Review
Loading...
or support indie stores by buying on