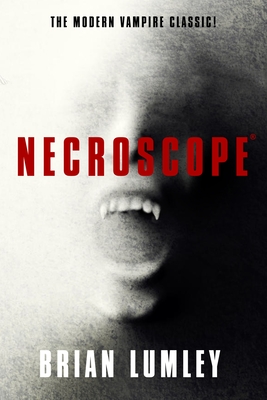 Eldritch horror meets international espionage as a bloodthirsty vampire attempts to conquer humanity in Brian Lumley's Necroscope, the first book of a titanic and terrifying trilogy!

Since childhood, Harry Keogh has been able to hear and speak to dead people. The dead have been his friends, his counselors, his inspiration. Through Harry, dead composers and writers reach new audiences; dead inventors see their creations come to life. Mathematician August Mobius, dead for more than a century, teaches Harry how to fold space and time, to travel anywhere and anywhen.

Seeking revenge after his beloved mother is murdered by a psychic--and psychotic--Russian spy, Harry is recruited by Britain's super-secret, psychically-powered spy organization, E-Branch.

The head of Russia's ESPionage "firm" is Boris Dragosani. Like Harry, Boris can hear the dead...but only when he is mutilating their corpses. Seeking power, Boris has made a pact with an undead Thing, long buried in the mountains of Romania; they intend to conquer the West with an army of demonic warriors.

Harry Keogh and an army of the dead stand in their way. The battle will be epic.

Necroscope, a finalist for the British Fantasy Award, is the first volume in a powerful series that has enthralled millions of readers with its very different look at vampires and vampire hunters, at the dead and the living and the worlds they share.

Praise for the Necroscope® series:

“Lumley’s lively mix of action and monstrosity [turns] the vampire into a wonderfully contemporary bane.” —Fear

Brian Lumley is a Grand Master of Horror and a winner of the British Fantasy Award. His many novels, including Necroscope, have been published in more than thirteen countries around the world. He lives in England with his wife, Barbara Ann.