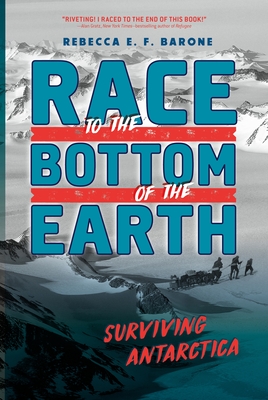 Race to the Bottom of the Earth

"Riveting! I raced to the end of this book!" —Alan Gratz, New York Times bestselling author of Refugee

In 1910, Captain Robert Scott prepared his crew for a trip that no one had ever completed: a journey to the South Pole. He vowed to get there any way he could, even if it meant looking death in the eye. Then, not long before he set out, another intrepid explorer, Roald Amundsen, set his sights on the same goal. Suddenly, two teams were vying to be the first to make history—what was to be an expedition had become a perilous race.

In 2018, Captain Louis Rudd readied himself for a similarly grueling task: the first unaided, unsupported solo crossing of treacherous Antarctica. But little did he know that athlete Colin O’Brady was training for the same trek—and he was determined to beat Louis to the finish line.

For fans of Michael Tougias’ The Finest Hours, this gripping account of two history-making moments of exploration and competition is perfect for budding scientists, survivalists, and thrill seekers.


Praise For Race to the Bottom of the Earth: Surviving Antarctica…

"Riveting! I raced to the end of this book!" —Alan Gratz, New York Times bestselling author of Refugee

"A nail-biting tale of adventure, tragedy, and superhuman determination—and also a luminous example of how our present lives are shaped by our immeasurably deep connection to our past." —Elizabeth Wein, #1 New York Times bestselling author of Code Name Verity

"A huge treat for adventure story fans—not one, but two incredible races across the fearsome and fascinating Antarctic!" —Steve Sheinkin, New York Times bestselling author of Bomb and Undefeated

"Race to the Bottom of the Earth is absorbing, compelling, and truly touching. Because of Barone's attention to detail, I felt the explorers' cold, hunger, fear, despair, motivation, and elation. Kids will love this book!" —Deborah Heiligman, author of the YALSA Excellence in Nonfiction Award-winning Vincent and Theo

* "A riveting tribute to epic tests of men against the elements." —Kirkus Reviews, starred review

* "Readers will be caught up in the real-time action sequences and should end up rooting for everybody as these determined individuals face unimaginable physical and mental hardships." —Booklist, starred review

Rebecca E. F. Barone holds a Bachelor of Arts in English and a Bachelor of Science in Mechanical Engineering from Bucknell University along with multiple graduate degrees in mechanical engineering. Her technical projects include injury analysis for the National Football League, and her short-form STEM writing has been published in the award-winning Muse magazine. She is passionate about serving and mentoring underrepresented populations in STEM and has continued to mentor in the kidlit arena with her participation in the #kidsneedmentors program. She is also the author of Race to the Bottom of the Earth: Surviving Antarctica (which received four starred reviews).
Loading...
or support indie stores by buying on