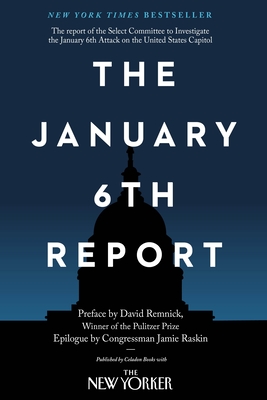 NOTE:
The January 6th Report appendices on pages 693–716 can be accessed via the QR code below, along with the hyperlinks from the chapter endnotes and witness testimony transcripts.

Celadon Books and The New Yorker present the report by the Select Committee to Investigate the Jan 6 Attack on the United States Capitol.

On January 6, 2021, insurgents stormed the U.S. Capitol, an act of domestic terror without parallel in American history, designed to disrupt the peaceful transfer of power. In a resolution six months later, the House of Representatives called it "one of the darkest days of our democracy," and established a special committee to investigate how and why the attack happened.

Celadon Books, in collaboration with The New Yorker, presents the committee's final report, the definitive account of January 6th and what led up to it, based on more than a year of investigation by nine members of Congress and committee staff, with a preface by David Remnick, the editor of The New Yorker and a winner of the Pulitzer Prize, and an epilogue by Congressman Jamie Raskin of Maryland, a member of the committee.


Praise For The January 6th Report…

"A must read for politics watchers…Remnick provides useful context, while committee member Jamie Raskin adds recommendations to the report, including direct election of presidents and abolition of the Electoral College in order to 'break out of the GOP’s matrix of democracy suppression.'"
–Kirkus Reviews

David Remnick, the editor of The New Yorker since 1998, began his career at the Washington Post, in 1982. He is the author of several books, including The Bridge, King of the World, Resurrection, and Lenin’s Tomb, for which he received both the Pulitzer Prize for nonfiction and a George Polk Award for excellence in journalism. He became a staff writer at The New Yorker in 1992 and has since written more than two hundred pieces for the magazine. In 2015, he debuted as the host of the national radio program and podcast, “The New Yorker Radio Hour,” which airs weekly. Under Remnick’s leadership, The New Yorker has become the country’s most honored magazine, with a hundred and ninety-two National Magazine Award nominations and fifty-three wins. In 2016, it became the first magazine to receive a Pulitzer Prize for its writing, and now has won six, including the gold medal for public service.

Congressman Jamie Raskin is the U.S. Representative for Maryland’s 8th District in the U.S. House of Representatives. A former professor of constitutional law at American University Washington College of Law who has also taught at Yale Law School, he has served on the House Oversight, Judiciary, Rules and Administration Committees. He was the lead impeachment manager in Donald Trump’s second impeachment trial in the Senate for inciting violent insurrection against the Union which ended in a 57-43 vote in favor of conviction. Congressman Raskin serves on the Select Committee to Investigate the January 6th Attack on the U.S. Capitol. He graduated from Harvard College and Harvard Law School, where he served as an Editor of the Harvard Law Review. He has authored several books, including We the Students, which was recently banned in Texas public schools; the Washington Post best-seller Overruling Democracy: The Supreme Court versus the American People; and the New York Times #1 best-seller Unthinkable: Trauma, Truth and the Trials of American Democracy (2022).
Loading...
or support indie stores by buying on