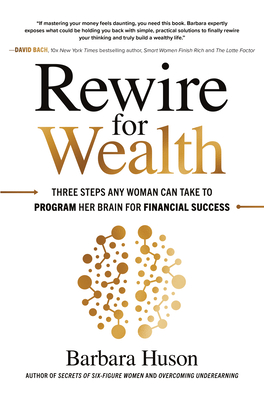 The men in her life had always handled Barbara Huson's money: First her father (the "R" of H&R Block), and then her husband, a stockbroker who turned out to be a compulsive gambler. When tax bills arrived for over $1m for his illegal deals, her ex left the country, her father refused to help, and Huson--who'd always been "scared and intimidated by money"--realized she had to grow up financially, fast.

Since that dramatic financial wake-up call, Huson has devoted herself to learning everything there is to know about women and money, and in Rewire for Wealth she goes to the very core of the disconnect between the two: According to multiple studies, women's and men's brains process information differently--and that has a profound effect when it comes to money. (Men, for example, view investing as a challenge; women see it as a threat.) Fortunately, you can "un-learn" previous bad lessons--and train your brain to process differently.

In Rewire for Wealth, Huson offers a proven and integrative approach to re-wiring your brain. Using the latest neuroscience, psychology, and mind-training techniques with original research that includes more than 20 years of hard-won financial expertise, she shows you how to quickly but methodically eliminate maladaptive financial behaviors, and expand your ability to build wealth.

By repeatedly applying a practical three-step formula--recognize, reframe, and respond differently--old brain circuits become weaker and new ones grow stronger, paving the way to a more confident approach to wealth building. You may never get a financial wake-up call as dramatic as Huson's, but the real, positive, and life-changing power to take charge, now, is at your fingertips.

Barbara Huson, formerly Barbara Stanny, of Port Townsend, Wa has devoted decades to empowering women as a career counselor, financial therapist, wealth coach, and author. She has published seven books and grown a thriving business lecturing and leading her in-demand courses and webinars. Her interest and expertise in finance comes from personal experience as the daughter of the "R" in H&R Block. Barbara has been featured on national television and radio shows, as well as major newspapers and magazines. She was an original columnist for msmoney.com, and had her own column, The Wealth Coach, on Forbes.com. Barbara has also traveled the country as a popular keynote speaker for women's organizations, corporations, financial firms, and universities.
Loading...
or support indie stores by buying on
(This book is on backorder)