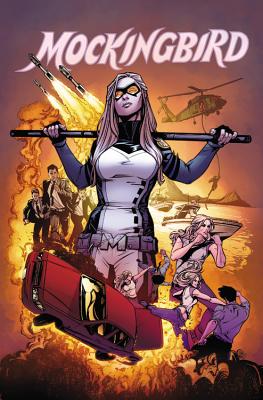 By Chelsea Cain (Text by), Kate Niemczyk (Text by)

Agent of S.H.I.E.L.D. Bobbi Morse, the former Avenger known as Mockingbird, goes solo in her own incredible adventures! With a scientific mind and a lethal mastery of martial arts, she's one of the most versatile, in-demand assets at Maria Hill's disposal - that makes her ideal for investigating strange goings-on in S.H.I.E.L.D.'s own medical and recovery network. And when Lance Hunter's undercover gig at the London Hellfire Club goes south, Mockingbird sets off, battle staves at the ready, to save him - and the Queen of England! From helping out a teen driven bonkers by her own new powers, to doing a little dog-sitting, Bobbi shows that she's a woman of many talents as bestselling author Chelsea Cain and artist Kate Niemczyk make Mockingbird sing!

After working as a creative director at a public relations firm in Portland for several years, Cain began writing humor books in her spare time, including The Hippie Handbook: How to Tie-Dye a T-Shirt, Flash a Peace Sign, and Other Essential Skills for the Carefree Life (Chronicle Books, 2004), Confessions of a Teen Sleuth (Bloomsbury, 2005), and Does this Cape Make Me Look Fat? Pop-Psychology for Superheroes (Chronicle Books, 2006), which Cain co-wrote with her husband. Cain also composed a weekly column for Portland's alternative newspaper, The Portland Mercury and started contributing to Portland's major daily, The Oregonian in 2003. when she left marketing behind to focus on writing full-time. Her last column with The Oregonian was posted on December 28, 2008.

Cain and her family currently reside in Portland, Oregon.
or support indie stores by buying on
Copyright © 2020 American Booksellers Association