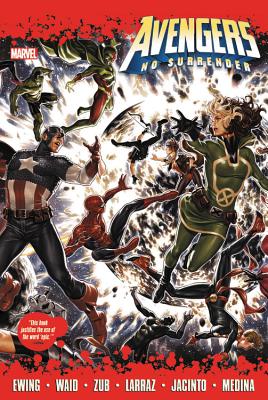 The Earth has been STOLEN! The sky burns while mysterious cosmic objects crash down from above, wreaking havoc across the world - and the Avengers are the last line of defense between Earth and the mysterious forces threatening to tear it apart. It's time to ASSEMBLE almost everyone who has ever been an Avenger! All of the Avengers you know and love come together to face threats beyond any they've faced before - including the Black Order and the Lethal Legion. These two teams of powerful villains bent on destroying each other have arrived on Earth, and they don't care who gets caught in the crossfire. And when the mysterious Challenger faces off against the Grandmaster, can the Earth survive the destruction they unleash? The Avengers are engaged in a game of cosmic proportions, but they don't know the rules...and not everyone will survive! Plus: Who is Voyager? Valerie Vector, the forgotten founding Avenger, is revealed. And fan-favorite Avenger, Hulk, returns to the fold as the stakes in the battle for Earth become clear! Tension is high and peril is imminent, but there's no option to surrender for the relentless Avengers!