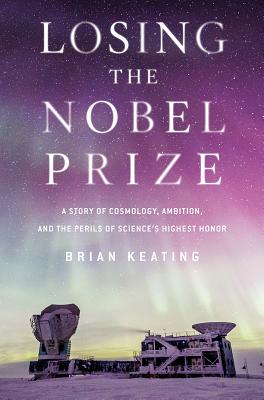 A Story of Cosmology, Ambition, and the Perils of Science's Highest Honor

The inside story of a quest to unlock one of cosmology’s biggest mysteries, derailed by the lure of the Nobel Prize.

What would it have been like to be an eyewitness to the Big Bang? In 2014, astronomers wielding BICEP2, the most powerful cosmology telescope ever made, revealed that they’d glimpsed the spark that ignited the Big Bang. Millions around the world tuned in to the announcement broadcast live from Harvard University, immediately igniting rumors of an imminent Nobel Prize. But had these cosmologists truly read the cosmic prologue or, swept up in Nobel dreams, had they been deceived by a galactic mirage?

In Losing the Nobel Prize, cosmologist and inventor of the BICEP (Background Imaging of Cosmic Extragalactic Polarization) experiment Brian Keating tells the inside story of BICEP2’s mesmerizing discovery and the scientific drama that ensued. In an adventure story that spans the globe from Rhode Island to the South Pole, from California to Chile, Keating takes us on a personal journey of revelation and discovery, bringing to vivid life the highly competitive, take-no-prisoners, publish-or-perish world of modern science. Along the way, he provocatively argues that the Nobel Prize, instead of advancing scientific progress, may actually hamper it, encouraging speed and greed while punishing collaboration and bold innovation. In a thoughtful reappraisal of the wishes of Alfred Nobel, Keating offers practical solutions for reforming the prize, providing a vision of a scientific future in which cosmologists may, finally, be able to see all the way back to the very beginning.


Praise For Losing the Nobel Prize: A Story of Cosmology, Ambition, and the Perils of Science's Highest Honor…

A riveting account of the rise and fall of the seeming confirmation of the cosmological theory of inflation... Keating offers vivid profiles of the personalities involved in shaping our modern view of the universe.
— Science

Brian Keating's riveting new book tells the inside story of the search for cosmic origins, emphasizing the influence of Nobel dreams and laying bare the question of whether the lure of grand prizes is ultimately a good thing for science.
— Brian Greene, author of The Elegant Universe

By losing the Nobel Prize, Keating and BICEP2 has led us to an even greater victory: the recognition that there are more important things in this Universe, like scientific truths, than the fleeting glory of an earthly award.
— Forbes

A fascinating autobiographical account, full of intriguing detail, of the passions and inspirations that underlie the scientific quest to comprehend the nature and origins of our universe...A highly thoughtful and informative book.
— Sir Roger Penrose, Emeritus Rouse Ball Professor of Mathematics, University of Oxford and author of The Emperor’s New Mind

Visionary Brian Keating takes us along on a refreshing and honest journey to see how great discoveries are made and unmade. This is one of the greatest stories told in cosmology. I couldn't put it down!
— Stephon Alexander, Professor of Physics, Brown University, jazz musician, and author of The Jazz of Physics

[Keating] is a deft writer, interweaving the science with personal musings.
— Nature

A compelling personal memoir, a fascinating history of cosmology, and an interesting firsthand account of a dramatic scientific adventure.
— Physics Today

In this riveting personal account, Brian Keating writes frankly of his challenges, frustrations, and motivations during the years spent building and operating the instruments used to tackle one of the most fundamental problems in science: how our universe began.
— Martin J. Rees, Astronomer Royal and author of Universe

A deeply personal journey that illuminates both the ultimate questions that cosmologists seek to answer, and the problems that we, as human beings, generate in the pursuit of those answers... Whether you're familiar with these ideas behind the evolution of our universe or have never heard the word 'inflation' before, Keating's narrative ensures you'll have the background you need to understand why this result was so sought-after.
— Astronomy.com

Brian Keating describes the thrilling highs and dramatic lows that accompany the relentless pursuit of science’s top accolade. This is a personal, cautionary tale to which we should all listen.
— Peter H. Diamandis, chairman/founder, XPRIZE Foundation and Singularity University, and author of Abundance and Bold

Brian Keating's compulsively readable book shows us the human side of science: the passion, the competition, the jealousies, the mistakes, the triumphs, the heartbreaks. A first-hand account of how science happens at the very highest levels.
— Sean Carroll, author of The Big Picture

Brian Keating is a wonderful storyteller with a very good story to tell. His tale is provocative and evocative as he takes us on a highly personal journey to the heart of the scientific exploration of the universe.
— Lee Smolin, Perimeter Institute, and author of Time Reborn

I loved this well-told tale of science, passion, and the pursuit—literally to the ends of the earth—of life’s purest questions. Brian Keating weaves together a must-read drama of big dreams, awe-inspiring technology, and a belief in the power of science to solve any puzzle. He is thoroughly modern and forward facing, questioning the veneration of the Nobel Prize, and making the case with his heartfelt story that the real prize is in the science itself.
— Julian Guthrie, author of How to Make a Spaceship

Three fascinating tales entwine between these covers; a young man growing to scientific maturity, an elusive baby picture of our universe, and the prize he hoped that picture would garner. The story, enthralling as it is, remains unfinished.
— Jill Tarter, Bernard M. Oliver Chair, SETI Institute

[Keating] is a deft writer, interweaving the science with personal musings.
— Nature

Our most august institutions—government, billion-dollar corporations, and even staid academia—are rife with human politicking and raw ambition. In Losing the Nobel Prize, Brian Keating describes just some of that jockeying and maneuvering among the smartest people in the world, studying the most abstruse and fundamental knowledge, while chasing humanity's greatest honor. Along the way, Keating provides understandable explanations of the more mind-bending aspects of modern cosmology, and just what we know about our universe.

A fascinating blend of personal history and an honest behind-the-scenes look at high-stakes science. Brian Keating was at the origin of what appeared to be one of the most exciting discoveries in modern cosmology. His vivid storytelling brings humanity’s search for the origin of the Universe to life.
— Jay Pasachoff, author of Peterson Field Guide to the Stars and Planets

Cosmologists had thought that they had glimpsed a distant image of the first moments of the universe. Instead, this image turned out to be ‘smudge on the window’: galactic dust once again bedeviling cosmologists. Keating conveys this exciting search through a personal tale of the ups and downs of cutting edge science.
— David Spergel, Professor, Princeton University, Co-Winner of the 2018 Breakthrough Prize in Fundamental Physics

In Losing the Nobel Prize, Brian Keating shares a view from the jagged frontiers of scientific exploration, offering fresh insights into the passions, ambitions, and competition that drive many researchers today. A fascinating journey.

— David Kaiser, professor of physics and the history of science, MIT and author of How the Hippies Saved Physics

According to Brian Keating, the Oscar and Nobel science prizes have a lot in common. In Losing the Nobel Prize, he weaves together the Nobel Prize institution, his personal life, and his own involvement in modern cosmology into a multi-facetted and highly readable story. Providing a vivid picture of the adventurous and competitive world of cosmological research, he also suggests radical reforms to the venerable but perhaps outdated Stockholm institution.

Brian Keating’s Losing the Nobel Prize tells an exciting story of breakthrough discoveries in modern cosmology, his personal hunt for signals from the Big Bang, and the pros and cons of Nobel dreams. The book is a page-turner. Keating’s misgivings about the role of the Nobel Prize as a driver of scientists to rush to discovery make for thought-provoking reading.

An extraordinary work of intellectual honesty. Astrophysicist Brian Keating explores the fascinating history and mixed effects of the Nobel Prize, especially on the field of physics. For a few years, Keating felt these effects, as people chattered about his own possible candidacy, before the chances and mischances of science changed course. That experience informs Losing the Nobel. An amazing journey.

Brian Keating is a professor of physics at the University of California, San Diego; a Fellow of the American Physical Society; a commercially rated pilot; and the director of the Simons Observatory. He received the 2007 Presidential Early Career Award for Scientists and Engineers for his work on BICEP. He lives with his family in La Jolla, California.
Loading...
or
Not Currently Available for Direct Purchase