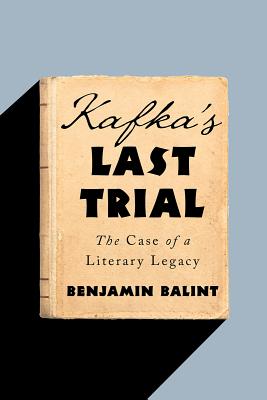 The Case of a Literary Legacy

The story of the international struggle to preserve Kafka’s literary legacy.

Kafka’s Last Trial begins with Kafka’s last instruction to his closest friend, Max Brod: to destroy all his remaining papers upon his death. But when the moment arrived in 1924, Brod could not bring himself to burn the unpublished works of the man he considered a literary genius—even a saint. Instead, Brod devoted his life to championing Kafka’s writing, rescuing his legacy from obscurity and physical destruction.

The story of Kafka’s posthumous life is itself Kafkaesque. By the time of Brod’s own death in Tel Aviv in 1968, Kafka’s major works had been published, transforming the once little-known writer into a pillar of literary modernism. Yet Brod left a wealth of still-unpublished papers to his secretary, who sold some, held on to the rest, and then passed the bulk of them on to her daughters, who in turn refused to release them. An international legal battle erupted to determine which country could claim ownership of Kafka’s work: Israel, where Kafka dreamed of living but never entered, or Germany, where Kafka’s three sisters perished in the Holocaust?

Benjamin Balint offers a gripping account of the controversial trial in Israeli courts—brimming with dilemmas legal, ethical, and political—that determined the fate of Kafka’s manuscripts. Deeply informed, with sharply drawn portraits and a remarkable ability to evoke a time and place, Kafka’s Last Trial is at once a brilliant biographical portrait of a literary genius, and the story of two countries whose national obsessions with overcoming the traumas of the past came to a head in a hotly contested trial for the right to claim the literary legacy of one of our modern masters.

Praise For Kafka's Last Trial: The Case of a Literary Legacy…

Dramatic and illuminating....raises momentous questions about nationality, religion, literature, and even the Holocaust.
— Adam Kirsch - The Atlantic

Absorbing....Balint elegantly intercuts courtroom scenes with episodes from Kafka’s biography and cultural afterlife. He brings out every paradox of a judicial process that tried to tie down this most ambivalent of authors, the ultimate 'disaffiliated pariah,' to a fixed identity....Balint’s scrupulous and sardonic prose makes you love Kafka, and dread the law.
— The Economist

Though Benjamin Balint’s masterful hunt for Kafka’s rightful ownership begins as a local dispute in an Israeli family court, it soon thickens into modernity’s most bitterly contentious cultural conundrum. Who should inherit Franz Kafka? The woman into whose hands his manuscripts fortuitously fell? Germany, the nation that murdered his sisters but claims his spirit? Israel, asserting a sovereign yet intimate ancestral right? Searing questions of language, of personal bequest, of friendship, of biographical evidence, of national pride, of justice, of deceit and betrayal, even of metaphysical allegiance, burn through Balint’s scrupulous trackings of Kafka’s final standing before the law.
— Cynthia Ozick, author of Foreign Bodies

Thrilling and profound, Kafka’s Last Trial shines new light not only on the greatest writer of the twentieth century and the fate of his work, but also on the larger question of who owns art or has a right to claim guardianship of it. Benjamin Balint combines the sharp eye of the courtroom journalist with the keen meditations of a literary and cultural thinker, and his research and lively intelligence deliver insights on every page.

Kafka’s Last Trial is a fascinating inquiry into—and meditation on—the nature of artistic genius and the proprietary claims any one individual or country has on the legacy of that genius. Benjamin Balint is both a superb investigative journalist and a gifted cultural critic. This is that rarest of books: a scholarly work that is also compulsively readable.

Superb....Beautifully crafted, with just the right ratios of empirical-legal information, intellectual history, critical awareness of Kafka and his work, and wise reflection. It is obviously the product of admirably patient research and rare dedication to quality control.
— Stanley A. Corngold, Professor Emeritus of German and Comparative Literature, Princeton University

Benjamin Balint is a research fellow at the Van Leer Institute in Jerusalem. The author of Running Commentary and coauthor of Jerusalem: City of the Book, he writes for The Wall Street Journal, Die Zeit, and the Claremont Review of Books, and his translations from the Hebrew have appeared in The New Yorker.
Loading...
or
Not Currently Available for Direct Purchase