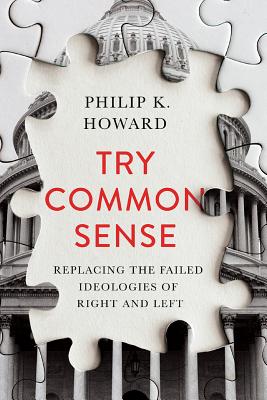 Replacing the Failed Ideologies of Right and Left

In this brief and powerful book, Philip K. Howard attacks the failed ideologies of both parties and proposes a radical simplification of government to re-empower Americans in their daily choices. Nothing will make sense until people are free to roll up their sleeves and make things work. The first steps are to abandon the philosophy of correctness and our devotion to mindless compliance.

Americans are a practical people. They want government to be practical. Washington can’t do anything practically. Worse, its bureaucracy prevents Americans from doing what’s sensible. Conservative bluster won’t fix this problem. Liberal hand-wringing won’t work either. Frustrated voters reach for extremist leaders, but they too get bogged down in the bureaucracy that has accumulated over the past century. Howard shows how America can push the reset button and create simpler frameworks focused on public goals where officials—prepare for the shock—are actually accountable for getting the job done.

Philip K. Howard is the founder of Common Good, a nonprofit that advocates for simplifying government. His book, The Rule of Nobody, was a finalist for the Manhattan Institute’s Hayek Book Prize. He lives in New York.

Praise For Try Common Sense: Replacing the Failed Ideologies of Right and Left…

If you have the feeling that America and its government and institutions are malfunctioning, then you should read this important book. It is time for us to… try common sense.
— Jonathan Haidt, New York University Stern School of Business, co-author of The Coddling of the American Mind

Philip K. Howard has written a transcendent guidebook for life after Trump. This profound and practical new book makes us hope for the particular situation of a Philip Howard presidential candidacy at the head of his exemplary party for the Common Good.
— George Gilder, author of Wealth and Poverty and Life After Google

E]ngagingly written and never-dull aperçu that pinpoints with deadly accuracy … so much that is wrong with the current American administrative state.
— Charlotte Allen

[M]asterful. … [D]emand that your elected officials read it – and act according to Howard’s advice.
— Quin Hillyer

A breath of fresh air in an America where the political atmosphere has been poisoned by partisan invective.
— Mary Ann Glendon, Harvard Law professor and author of Rights Talk and The Forum and the Tower

With provocative arguments and convincing solutions, Howard offers a fresh, nonpartisan approach that will appeal to anyone frustrated with government's ongoing failures.
or
Buy Here
Copyright © 2020 American Booksellers Association