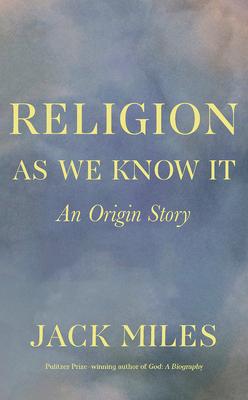 Religion as We Know It

A brief, beautiful invitation to the study of religion from a Pulitzer Prize winner.

How did our forebears begin to think about religion as a distinct domain, separate from other activities that were once inseparable from it? Starting at the birth of Christianity—a religion inextricably bound to Western thought—Jack Miles reveals how the West’s “common sense” understanding of religion emerged and then changed as insular Europe discovered the rest of the world. In a moving postscript, he shows how this very story continues today in the hearts of individual religious or irreligious men and women.

Praise For Religion as We Know It: An Origin Story…

Any student of theology will be enlightened by this deeply satisfying work.
— Publishers Weekly (starred review)

This is an exceptional work that challenges and rewards careful reading and thought. It belongs in every library.
— Booklist (starred review)

Jack Miles has written the perfect first book for religious studies beginners. He starts with the widely held American understanding of religion but ends arguing brilliantly that inescapable human ignorance creates the possibility of welcoming the new, the unexpected, even the religious. Our self-absorbed age needs this book.
— Mark C. Taylor, Columbia University

The question of the origin of religion has rarely been addressed with the erudition and eloquence of Jack Miles. Drawing on a remarkable wealth of sources across time and place, he offers much for us to ponder in an essay that is at once highly learned and deeply personal.
— Donald S. Lopez Jr., University of Michigan

Jack Miles is Distinguished Professor Emeritus of English and Religious Studies with the University of California at Irvine and Senior Fellow for Religious Affairs with the Pacific Council on International Policy. He spent 1960-1970 as a Jesuit seminarian, studying at the Pontifical Gregorian University in Rome and the Hebrew University in Jerusalem before enrolling at Harvard University, where he completed a Ph.D. in Near Eastern languages in 1971. His book God: A Biography won a Pulitzer Prize in 1996. Its sequel Christ: A Crisis in the Life of God led to his being named a MacArthur Fellow for 2003-2007. The third in this trilogy, God in the Qur'an, was published in 2018. Miles is general editor of The Norton Anthology of World Religions and, most recently, the author of Religion As We Know It: An Origin Story.
Loading...
or support indie stores by buying on