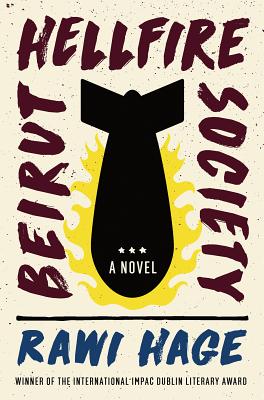 A searing and visionary novel set in war-torn 1970s Beirut, from an author praised for his "fierce poetic originality" (Boston Globe) and "uncompromising vision" (Colm Tóibín).

On a ravaged street overlooking a cemetery in Beirut’s Christian enclave, we meet an eccentric young man named Pavlov, the son of a local undertaker. When his father meets a sudden and untimely death, Pavlov is approached by a colorful member of the mysterious Hellfire Society—an anti-religious sect that, among many rebellious and often salacious activities, arranges secret burial for outcasts who have been denied last rites because of their religion or sexuality.

Pavlov agrees to take on his father’s work for the society, and over the course of the novel he becomes a survivor-chronicler of his embattled and fading community at the heart of Lebanon’s civil war. His new role introduces him to an unconventional cast of characters, including a father searching for his son’s body, a mysterious woman who takes up residence on Pavlov’s stairs after a bombing, and the flamboyant head of the Hellfire Society, El-Marquis.

Deftly combining comedy with tragedy, gritty reality with surreal absurdity, Beirut Hellfire Society asks: What, after all, can be preserved in the face of certain change and imminent death? The answer is at once propulsive, elegiac, outrageous, profane, and transcendent—and a profoundly moving fable on what it means to live through war.

[Beirut Hellfire Society] draws on Hage's antic, many-voiced gifts to make a chronicle of war and unrelenting death into a provocative entertainment.

[A] hell of a story... Pavlov is an irresistible lead: stony, well-read, tightly controlled, with a deep well of sadness. Call him Harry Bosch but in Lebanon.
— Nathan Deuel

Beirut Hellfire Society crackles with the kinetic energy of a dancer…The absurd volume of deaths is also tempered by Hage’s signature dark humor and stylistic playfulness.


A wild, viscerally exciting and often bleakly funny novel of ideas. Comparisons aren’t always useful, but this reviewer thought of a work…equally unflinching in its de-romanticizing of a subject most of us prefer to avoid: Cormac McCarthy’s Blood Meridian.


Place: Beirut. Time: 1970s. But Rawi Hage’s Beirut Hellfire Society is, actually, deeply set in any place consumed by killing and death during any time in human history. Fire is Beirut Hellfire Society’s elemental core—inherited fires of grief and sorrow, justice and love. Fantastically framed, its envisioned images and scenes burn with a mythic intensity not easily forgotten. Truly a masterpiece.

— Lawrence Joseph, author of So Where Are We?

Potent... Hage's novel is a brisk, surreal, and often comic plunge into surviving the absurd nihilism of war.

Rawi Hage  is the author of four novels. Beirut Hellfire Society was longlisted for the Scotiabank Giller Prize, shortlisted for the Rogers Writers’ Trust Fiction Prize, and a finalist for the Governor General’s Literary Award. Born in Beirut, Lebanon, Hage now lives in Montreal.
Loading...
or support indie stores by buying on