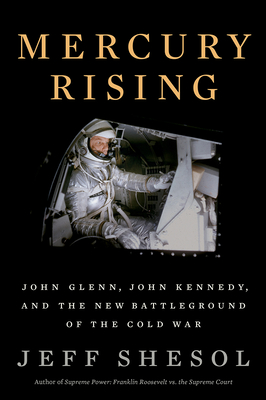 John Glenn, John Kennedy, and the New Battleground of the Cold War

A riveting history of the epic orbital flight that put America back into the space race.

If the United States couldn’t catch up to the Soviets in space, how could it compete with them on Earth? That was the question facing John F. Kennedy at the height of the Cold War—a perilous time when the Soviet Union built the wall in Berlin, tested nuclear bombs more destructive than any in history, and beat the United States to every major milestone in space. The race to the heavens seemed a race for survival—and America was losing.

On February 20, 1962, when John Glenn blasted into orbit aboard Friendship 7, his mission was not only to circle the planet; it was to calm the fears of the free world and renew America’s sense of self-belief. Mercury Rising re-creates the tension and excitement of a flight that shifted the momentum of the space race and put the United States on the path to the moon. Drawing on new archival sources, personal interviews, and previously unpublished notes by Glenn himself, Mercury Rising reveals how the astronaut’s heroics lifted the nation’s hopes in what Kennedy called the "hour of maximum danger."


Praise For Mercury Rising: John Glenn, John Kennedy, and the New Battleground of the Cold War…

[Mercury Rising] brings Glenn’s story alive again with both nostalgia and a riveting, fast-paced narrative ... Shesol does an excellent job of embedding Glenn's story into the wider Cold War context.

The perfect book for anyone who wants to read about real life adventures and learn what makes heroes tick ... It will help you understand how some families stay together in the face of existential challenges, how American politics and industrial technology converge, and how the United States won the Cold War competition with the USSR.
— Walter Clemens - New York Journal of Books

What a fresh and refreshing look at a familiar subject, now seen through an important geo-political lens rather than a scientific, technological, and nationalistic one. The new context is exciting, the usual characters made more vivid and dimensional. Bravo.
— Ken Burns

I loved this book. From the opening lines, I was riveted—I couldn’t put it down. Even though we know the ending, Jeff Shesol somehow creates a cliffhanger—immersive history that lifts us out of the moment we’re in and transports us to a time of genuine heroes. As this book reveals, John Glenn—stoic and selfless, but also restless and ambitious—embodies what we hold most dear about being American.
— Matt Damon

If there’s such a thing as a white-knuckle read, this is it. But Mercury Rising is a twofer. Jeff Shesol interweaves heart-racing renderings of the dread and adrenaline of the earliest space flights with keen analysis of the geopolitical rivalry that drove the arc and pace of the space race. John Glenn emerges as both homespun hero and Cold War cat’s-paw, as well as a flesh-and-blood human being—and one hell of a pilot.

This is a story for the ages—the best account, ever, of the flight of Friendship 7. Shesol presents the Mercury Seven and their storied competition in a fresh and even provoking new light. Brilliantly researched and written, Mercury Rising is the book to read on the Cold War collaboration between John Kennedy and John Glenn.

— Kris Stoever, author, with her father, Scott Carpenter, of For Spacious Skies: The Uncommon Journey of an Astronaut

I had the privilege of knowing John Glenn well—I helped select him and train him as an astronaut—and Jeff Shesol has rendered the most compelling portrait I’ve seen of Glenn since the real thing. This gripping book captures the fast pace and high stakes of the space program and shows how Glenn helped win the struggle to surpass the Russians.
— Robert Voas, astronaut training officer, Project Mercury

This book amazed me. It brought back such memories that I felt like I was reliving the events.
— Jerry Roberts, guidance and control systems engineer, Projects Mercury and Gemini

A welcome retelling of a significant piece of the Cold War saga and the opening of the space frontier [and] a good choice for readers interested in the Cold War, the space race, and the 1960s American political landscape.
— Kirkus Reviews

This well-researched and exciting read is recommended for those interested in the history of the space race or the Cold War.
— Dave Pugl - Library Journal

Shesol chronicles the early days of the space program with a historian’s attention to detail and a novelist’s flair for interesting storytelling.
— Gary Day - Booklist

Jeff Shesol is the author of Supreme Power and Mutual Contempt, both selected as New York Times Notable Books of the Year. He is a former speechwriter for President Bill Clinton and is a founding partner of West Wing Writers.
Loading...
or support indie stores by buying on
(This book is on backorder)