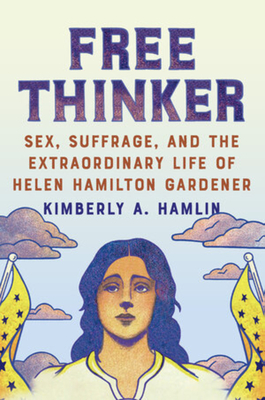 Sex, Suffrage, and the Extraordinary Life of Helen Hamilton Gardener

A story of transgression in the face of religious ideology, a sexist scientific establishment, and political resistance to securing women’s right to vote.

When Ohio newspapers published the story of Alice Chenoweth’s affair with a married man, she changed her name to Helen Hamilton Gardener, moved to New York, and devoted her life to championing women’s rights and decrying the sexual double standard. She published seven books and countless essays, hobnobbed with the most interesting thinkers of her era, and was celebrated for her audacious ideas and keen wit. Opposed to piety, temperance, and conventional thinking, Gardener eventually settled in Washington, D.C., where her tireless work proved, according to her colleague Maud Wood Park, "the most potent factor" in the passage of the Nineteenth Amendment.

Free Thinker is the first biography of Helen Hamilton Gardener, who died as the highest-ranking woman in federal government and a national symbol of female citizenship. Hamlin exposes the racism that underpinned the women’s suffrage movement and the contradictions of Gardener’s politics. Her life sheds new light on why it was not until the passage of the 1965 Voting Rights Act that the Nineteenth Amendment became a reality for all women.

Celebrated in her own time but lost to history in ours, Gardener was hailed as the "Harriet Beecher Stowe of Fallen Women." Free Thinker is the story of a woman whose struggles, both personal and political, resound in today’s fight for gender and sexual equity.

Hamlin provides a captivating behind-the-scenes view of the suffrage movement on the cusp of its final victory, and her eloquent account sparkles with Gardener’s sharp personality. Feminists and fans of women’s history will be exhilarated.
— Publishers Weekly

This vivid and exuberant portrait of a dynamic, complex activist and her world is highly recommended.
— Sara Jorgensen - Booklist (starred review)

Throughout the chronological, passionately researched narrative, Hamlin captures all angles of her fascinating subject. A captivating story of yet another strong, brilliant woman who should be better known.
— Kirkus Reviews

Suffragist Helen Hamilton Gardener is someone we need to know…Kimberly A. Hamlin’s careful research, unflinching eye, and storytelling gift reveal how Gardener’s path to the ballot was paved with ideas that ran from free thought and the science of ‘heredity’ to white supremacy. Free Thinker makes plain how suffragists like Gardener left a legacy on voting rights that was uneven at best. We live with its vestiges until today.

— Martha S. Jones, author of Birthright Citizens: A History of Race and Rights in Antebellum America

Free Thinker is as vivid and arresting as its subject. And Helen Hamilton Gardener’s insistent argument, that American women were ‘self-respecting, self-directing human units with brains and bodies sacredly their own,’ still feels as urgent and as radical as it did a century ago.

— Jane Kamensky, Pforzheimer Foundation Director of the Schlesinger Library on the History of Women in America, Harvard University

Kimberly A. Hamlin’s incisive and nuanced biography completes the suffrage picture with her deeply researched and gripping story of a woman who transgressed social and sexual rules…Hamlin has righted the historical record with Free Thinker, required reading for absolutely everyone.

— Stacy A. Cordery, author of Juliette Gordon Low: The Remarkable Founder of the Girl Scouts

Free Thinker is an incredible biography of far more than a fascinating woman…A must read for anyone looking for a nuanced view of the complicated legacy of the suffrage movement.

— Marcia Chatelain, author of Franchise: The Golden Arches in Black America and South Side Girls: Growing up in the Great Migration

Kimberly A. Hamlin is an award-winning historian, author, and professor specializing in the history of women, gender, and sex in the United States. She lives in Cincinnati, Ohio.
Loading...
or support indie stores by buying on