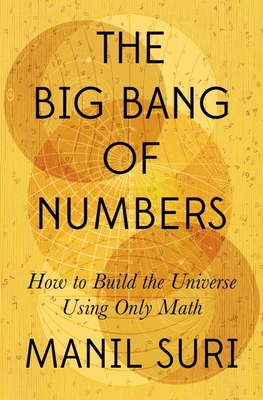 The Big Bang of Numbers

How to Build the Universe Using Only Math

An engaging and imaginative tour through the fundamental mathematical concepts—from arithmetic to infinity—that form the building blocks of our universe.

Our universe has multiple origin stories, from religious creation myths to the Big Bang of scientists. But if we leave those behind and start from nothing—no matter, no cosmos, not even empty space—could we create a universe using only math? Irreverent, richly illustrated, and boundlessly creative, The Big Bang of Numbers invites us to try.

In this new mathematical origin story, mathematician and novelist Manil Suri creates a natural progression of ideas needed to design our world, starting with numbers and continuing through geometry, algebra, and beyond. He reveals the secret lives of real and imaginary numbers, teaches them to play abstract games with real-world applications, discovers unexpected patterns that connect humble lifeforms to enormous galaxies, and explores mathematical underpinnings for randomness and beauty. With evocative examples ranging from multidimensional crochet to the Mona Lisa’s asymmetrical smile, as well as ingenious storytelling that helps illuminate complex concepts like infinity and relativity, The Big Bang of Numbers charts a playful, inventive course to existence. Mathematics, Suri shows, might best be understood not as something we invent to explain Nature, but as the source of all creation, whose directives Nature tries to obey as best she can.

Offering both striking new perspectives for math aficionados and an accessible introduction for anyone daunted by calculation, The Big Bang of Numbers proves that we can all fall in love with math.


Praise For The Big Bang of Numbers: How to Build the Universe Using Only Math…

[Suri] successfully explores many areas of seemingly pure math that explain the natural world... He also sheds light on abstruse subjects (fractals, infinity, curved space) that puzzle humans more than they should, creating a text that is deeper than most popular writing on math but worth the effort. A successful contribution to the math-isn’t-boring genre.
— Kirkus Reviews

In The Big Bang of Numbers, Manil Suri invites the reader to create a universe made of mathematical ideas, sparking a thrill that may catch you off guard—an exhilarating sensation of playfulness, power, and insight.

Who knew numbers could be so charming? So industrious? Suri takes us on a lighthearted journey all the way from nothing (zero) to infinity. Math has rarely been so readable.
— Karen Joy Fowler, New York Times bestselling author of We Are All Completely Beside Ourselves

A most unusual, creative, and fascinating account of mathematics that relies not on equations or formulas, but on real-life examples, metaphors, paradoxes, and lovely vignettes.
— John Allen Paulos, author of Innumeracy and A Mathematician Reads the Newspaper

Manil Suri is a distinguished mathematics professor at the University of Maryland, Baltimore County. Author of three acclaimed novels, including The Death of Vishnu, he is a former contributing opinion writer at the New York Times, for which he has written several widely read pieces on mathematics. He lives in Silver Spring, Maryland.
Loading...
or support indie stores by buying on