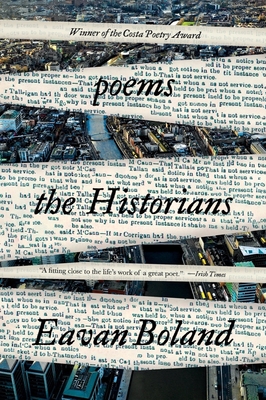 Winner of the 2020 Costa Poetry Award

A forceful and moving final volume from one of the most masterful poets of the twentieth century.

Throughout her nearly sixty-year career, acclaimed poet Eavan Boland came to be known for her exquisite ability to weave myth, history, and the life of an ordinary woman into mesmerizing poetry. She was an essential voice in both feminist and Irish literature, praised for her "edgy precision, an uncanny sympathy and warmth, an unsettling sense of history" (J. D. McClatchy). Her final volume, The Historians, is the culmination of her signature themes, exploring the ways in which the hidden, sometimes all-but-erased stories of women’s lives can powerfully revise our sense of the past.

Two women burning letters in a back garden. A poet who died too young. A mother’s parable to her daughter. Boland listens to women who have long had no agency in the way their stories were told; in the title poem, she writes: "Say the word history: I see / your mother, mine. / … / Their hands are full of words." Addressing Irish suffragettes in the final poem, Boland promises: "We will not leave you behind," a promise that animates each poem in this radiant collection. These extraordinary, intimate narratives cling to the future through memory, anger, and love in ways that rebuke the official record we call history.


Praise For The Historians: Poems…

It is a miraculous task that Eavan Boland set for herself in The Historians: nothing less than the redefining of both history and poetry as ongoing individual consciousness transforming into artistic process. In the book’s first poem, 'The Fire Gilder,' this process occurs before the reader’s eyes, posited as an artist mother’s love of silver and gold, 'one was volatile, one was not.' In exact phenomenal mimicry, Boland demonstrates how memory is separated from knowledge (one volatile, the other not). Each poem is a revelation of a past made new and a present equal in the accuracy of eloquent regard. This book is alive as a legacy for all readers—and for the future where Eavan Boland’s greatness will endure.

Eavan Boland could never tolerate the silences and erasures of official history. She knew too well who was left out. She wrote to fill the gaps, to memorialize people on the margins, particularly on the margins of empire. She used her own experience to feel her way into the lives of other women, especially Irish women, and brought their experience out of the shadows. In her splendid last book, The Historians, she recalls how she started to write 'burning light, / building heat until all at once / I was the fire gilder / ready to lay radiance down.' I cannot yet accept Eavan Boland’s untimely death, but I’m grateful for the way that all her life she laid that radiance down, and then raised it up.

Eavan Boland (1944—2020) was the author of more than a dozen volumes of poetry, including Outside History and several volumes of nonfiction, and was coeditor of the anthology The Making of Poem. Born in Dublin, Ireland, she was one of the foremost female voices in Irish literature. She received a Lannan Foundation Award and an American Ireland Fund Literary Award, among other honors. She taught at Trinity College Dublin, University College Dublin, Bowdoin College, and Stanford University, where she was the director of the creative writing program.
Loading...
or support indie stores by buying on