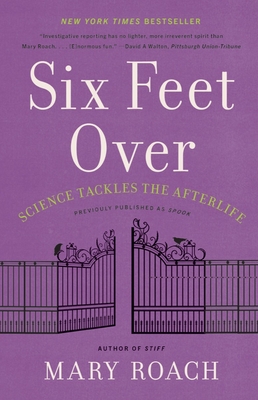 The best-selling author of Stiff  and Bonk trains her considerable wit and curiosity on the human soul.

"What happens when we die? Does the light just go out and that's that—the million-year nap? Or will some part of my personality, my me-ness persist? What will that feel like? What will I do all day? Is there a place to plug in my lap-top?" In an attempt to find out, Mary Roach brings her tireless curiosity to bear on an array of contemporary and historical soul-searchers: scientists, schemers, engineers, mediums, all trying to prove (or disprove) that life goes on after we die.


Praise For Six Feet Over: Science Tackles the Afterlife…

The general reader’s ideal emissary to the arcana of serious science. . . . Roach’s writing has what science has so far failed to find: a divine spark.
— Malcolm Jones - Newsweek

Surreal, fascinating, at times absurd and always hilarious, Mary Roach may not reveal the street address of our final destination, but in Spook she makes it sound less like a morgue and more like a comedy club.

Reading Spook is like attending a lecture by a professor who is equal parts Groucho Marx and Stephen Jay Gould, both enlightening and entertaining.

Mary Roach is the author of five best-selling works of nonfiction, including Grunt, Stiff, and, most recently, Fuzz. Her writing has appeared in National Geographic and the New York Times Magazine, among other publications. She lives in Oakland, California.
Loading...
or support indie stores by buying on