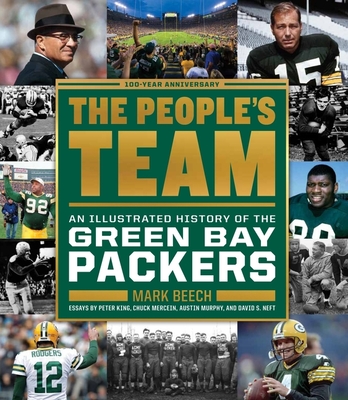 An Illustrated History of the Green Bay Packers

Not only are the Packers the only fan-owned team in any of North America’s major pro sports leagues, but Green Bay—population 104,057—is also the smallest city with a big-time franchise. The Packers are, in other words, unlikely candidates to be pro football's preeminent team. And yet nobody in the NFL has won more championships. The story of Titletown, USA, is the greatest story in sports.

Through extensive archival research and unmatched insider access to players and team officials, past and present, Mark Beech tells the first complete rags-to-riches history of the Green Bay Packers, a full chronicle of the most illustrious team in NFL history. The People’s Team paints compelling pictures of a franchise, a town, and a fan base. No other team in pro sports is so bound to the place that gave birth to it. Here is the story of the Packers and of Green Bay—from the days of the French fur traders who settled on the shores of La Baie in the seventeenth century, to the team’s pursuit of its fourteenth NFL championship.

Featuring essays by Peter King, Chuck Mercein, Austin Murphy, and David S. Neft, The People’s Team is a must-have for fans, old and new, and the definitive illustrated history of the most important team in the NFL.


Praise For The People's Team: An Illustrated History of the Green Bay Packers…

“Fascinating. The People’s Team is at once scholarly and lyrical, sweeping and propulsive. Mark Beech has written the definitive history of the Green Bay Packers and it reads like the epic saga of a famous American family. Which the Packers are, in many ways.”
—Steve Rushin, author of Nights in White Castle and Sting-Ray Afternoons

"Any history the Green Bay Packers is a celebration of football itself. In The People's Team, Mark Beech gives the best brand in football the biography it deserves - meticulously researched, wonderfully written. Both the prose and photos pop off the page."
—Joe Drape, author of the New York Times best-seller Our Boys: A Perfect Season on the Plains with the Smith Center Redmen

"Having researched and written Brett Favre's biography, I figured I absorbed everything one needs to know about the Green Bay Packers. Then along comes Mark Beech with the exceptional, The People's Team. If you're a Packers fan—or, truly, an NFL fan—this engrossing book is all you."
—Jeff Pearlman, bestselling author of Gunslinger and Football for a Buck

"The Green Bay Packers are unlike any team in American professional sports, and Mark Beech has written a book that is unlike any history of the Packers. Beech peels back the layers of mythology and populates his work with endless detail about the people who turned a small, Midwestern city into one of the capitals of the sports world. The People's Team is required reading not just for football fans, but for students of the deep and complex relationships between towns and teams."
—Tim Layden, senior writer, Sports Illustrated

"Towards the end of this definitive and entertaining book, Mark Beech writes a very simple and illuminating sentence: 'The Packers and the people are one.' That sentiment is pervasive throughout this history of America’s most celebrated and vital NFL team. With a journalist’s rigor and a true fan’s heart, Beech tells the full story of a team, a league, a town — and a country. The football icons that come and go, from Curly Lambeau to Bart Starr to Aaron Rodgers, are ushers of a much larger and more meaningful story, as unique as a Brett Favre underhanded toss for a touchdown: The Green Bay Packers wouldn’t exist without the people of Green Bay. They win together. They are one, indeed."
—Seth Wickersham, ESPN

"With archival research, iconic photography, and essays from the likes of Peter King, this look at a storied franchise is a must for cheeseheads."
—Sports Illustrated

“Exceptional . . . Written with great skill and attention to detail . . . [An] essential, attractive team history . . . The Packers have a national following and a history unlike any other. This beautiful book chronicles that legacy exceedingly well.”
—Library Journal, starred review

“Biographical sketches of the team’s most prominent figures enhance the narrative, as do many intriguing factoids . . . An overall illuminating sports narrative. A must for Packers fan and a worthwhile read for football enthusiasts in general.”
—Kirkus Reviews

"A franchise and a fan base, many of them actual shareholders, somehow stand the test of time and are documented in all their mythology and magnificence by the former Sports Illustrated scribe."
—Los Angeles Times

MARK BEECH spent eighteen years at Sports Illustrated before becoming a senior editor at the Players’ Tribune in 2016. A West Point graduate, he was introduced to the special relationship between the Packers and their fans after moving to Milwaukee in the mid-1980s. This is his second book. He lives in Westchester County, New York.
Loading...
or support indie stores by buying on
(This book is on backorder)