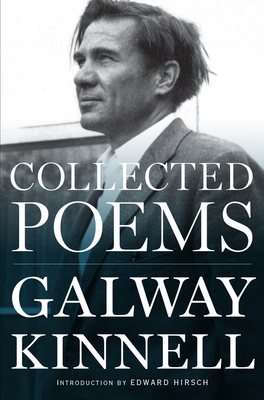 The life’s work of “one of the true master poets of his generation,”* whose poetry helped shape the consciousness of an age

For Galway Kinnell, it was “the poet’s job to figure out what’s happening within oneself, to figure out the connection between the self and the world, and to get it down in words that have a lasting shape, that have a chance of lasting.” This comprehensive volume includes “The Avenue Bearing the Initial of Christ into the New World,” Kinnell’s stunning poem of immigrant life on the Lower East Side of New York, the incantatory book-length poem The Book of Nightmares, the searing evocation of Hiroshima in “The Fundamental Project of Technology,” the iconic themes of his middle years—eros, family, the natural world (“After Making Love We Hear Footsteps,” “The Bear,” “Saint Francis and the Sow,” “Blackberry Eating”)—and the unflinchingly introspective work of his later years. Spanning six decades, this is the essential collection for old and new devotees of “a poet of the rarest ability . . . who can flesh out music, raise the spirits, and break the heart.”**

GALWAY KINNELL (1927–2014) was a MacArthur Fellow and state poet of Vermont. In 1982 his Selected Poems won the Pulitzer Prize and the National Book Award. For many years he was the Erich Maria Remarque Professor of Creative Writing at New York University, as well as a chancellor of the Academy of American Poets. For thirty-five years—from The Book of Nightmares to Mortal Acts and, most recently, Strong Is Your Hold—Galway Kinnell enriched American poetry, not only with his poems but also with his teaching and powerful public readings.

EDWARD HIRSCH is a celebrated poet and peerless advocate for poetry. A MacArthur fellow, he has published ten books of poems and six books of prose. He has received numerous awards and fellowships, including a National Endowment for the Arts Fellowship, the Rome Prize, a Pablo Neruda Presidential Medal of Honor, and the American Academy of Arts and Letters Award for literature. He serves as president of the John Simon Guggenheim Memorial Foundation and lives in Brooklyn.