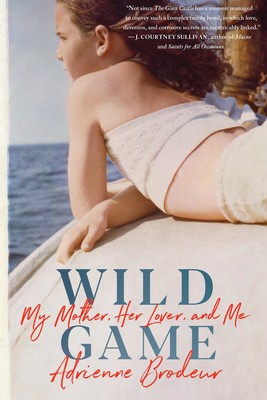 My Mother, Her Lover, and Me

A NATIONAL BESTSELLER. A daughter’s tale of living in the thrall of her magnetic, complicated mother, and the chilling consequences of her complicity.

Praise For Wild Game: My Mother, Her Lover, and Me…

A National Bestseller   A Best Book of 2019 from: NPR * BuzzFeed * Slate * People*  Chicago Public Library * Real Simple * Library Journal * Washington Post * Amazon * CBC   A Best of Fall Title from: People * Refinery29 * Entertainment Weekly * BuzzFeed * NPR’s On Point * Town & Country * Real Simple * New York Post * Palm Beach Post * Toronto Star * Orange Country Register * Bustle * Bookish * BookPage * Kirkus* BBC Culture* Debutiful   Winner of the New England Society Book Award   A Book of the Month Pick (September)  An Amazon Best of the Month/Spotlight Pick (October)  The Nervous Breakdown Book Club (October)  An Apple Best of the Month (October)  A Bookish “Kelly’s Pick” (Fall)  “Exquisite and harrowing . . . [WILD GAME] is so gorgeously written and deeply insightful, and with a line of narrative tension that never slacks, from the first page to the last, that it’s one you’ll likely read in a single, delicious sitting.” —New York Times Book Review  "Wild Game is a memoir, but it reads very much like a novel with a first-person narrator, bringing readers closely into scenes with vivid sensual detail that paints the atmosphere with the adoring eyes of the enthralled daughter the author once was. Wild Game, for all its luscious prose and tantalizing elements, is ultimately about the slow and painful process of losing a mother." —NPR   "This electrifying, gorgeously written memoir will hold you captive until the last word." —People, “Book of the Week”   "Brodeur is a deft memoirist, portraying Malabar as a woman traumatized by a violent parent and early tragedy. In this stunning tale of treachery—unsettling yet seductive—we are led through some of the darkest and most alluring corridors of the human heart." —O Magazine   "[A] vivid memoir…[Brodeur] writes beautifully, even tenderly, as a mother herself, aware of repercussions, knowing how it all ended." —BBC   "Perhaps everyone has a memoir in them—but only some lives are instant and undeniable blockbusters. Adrienne Brodeur’s is one...Brodeur tells a story so extraordinary, so juicy, and so well that your only option is to buy copies for your friends, too...The miracle of Wild Game is that Brodeur’s writing is as incredible as her story. Brodeur captures the emotional gradations in a tense room as deftly as she establishes the sea salt air and elaborate dinners of her childhood...[Wild Game] will undeniably be the book club pick of 2019." —Refinery29   “Adrienne Brodeur’s breathless memoir starts off with a bang…Every single turn of this memoir is gripping…Brodeur’s descriptions of her mother read like a paramour waxing rhapsodic, the recollections of someone in inescapable thrall…In Wild Game, Brodeur shows us that what defines our lives is choosing just how bound we want to be."” —San Francisco Chronicle   “Brodeur’s memoir has set both Hollywood and publishing ablaze.” —Entertainment Weekly   “Shocking, poignant, unputdownable.” —People Magazine   “It’s the kind of juicy what-is-happening memoir that just begs to be made into a movie.”— —

ADRIENNE BRODEUR began her career in publishing as the co-founder, along with filmmaker Francis Ford Coppola, of the fiction magazine Zoetrope: All-Story, which won the National Magazine Award for Best Fiction three times and launched the careers of many writers. She was a book editor at Houghton Mifflin Harcourt for many years and, currently, she is the Executive Director of Aspen Words, a program of the Aspen Institute. She has published essays in the New York Times. She lives in Cambridge with her husband and children.

1. What do we learn about the author from how she tells her tale—both what she chooses to tell, and the tone of voice in which she tells it? Is this a story about her mother’s misbehavior, or about something else?

2. Revisit the Mary Oliver poem, “The Uses of Sorrow,” that serves as an epigraph to the book. Do you see the darknesses in your own life as gifts, or would you wish some of them away? Is growth possible without suffering? Consider Margot’s advice to Rennie that happiness is a choice. Is gratitude in the face of life’s difficulties a habit of mind we can choose to cultivate?

3. Malabar makes life more interesting for everyone, including us as readers. Do you feel a little bewitched by her charms? Would she be as compelling without her flaws? Do you admire her? If so, in what ways?

4. How does Malabar upend traditional roles for women, and how does she subscribe to them? How has her mother Vivian’s influence shaped her sense of identity, as well as her relationships with other women? Rennie’s friend Kyra diagnoses Malabar as lonely, and says that loneliness is about not being known for who you are. Does Malabar know herself?

5. Malabar’s marriage to Charles and her romance with Ben occur within a privileged milieu at a time when gender roles were narrowly defined. What are the values of this social set, and how do they do harm to its members? Can the follies of the characters be blamed in part on an unhealthy worldview?

6. Compare Ben’s conduct during the affair to Malabar’s. Whom do you feel more sympathy for? When you look at all the adult characters in the book, is there a villain in this story?

7. Rennie is a victim of harm, a beneficiary of kindness, and an actor—for good and ill—in other people’s lives. Which of these roles does she have the most difficulty acknowledging? Do we learn more about how to live from our parents’ mistakes or from what they do right?

8. “Understandable but not acceptable” becomes Jack and Rennie’s mantra in light of the affair. Where does Rennie demonstrate that she doesn’t accept her mother’s behavior? Do you think she might hold her mother more accountable? Who is helped more by forgiveness: the forgiven or the forgiver?

10. Rennie manages to separate from her mother, assume ownership of her own life, and chart a new path. What are her strengths, and how do we see her using them first to help her mother, and later, using them as a force for good in her own life? What other resources does she employ to help her become the person she wants to be? Does she inspire you to address aspects of your own life that are holding you back?

11. Rennie has two experiences where time collapses and the layers of her past rush in: just before her wedding and after she gives birth to her daughter (pp. 176, 223). What do these moments do for her? Have you had a similar experience that has granted you a profound glimpse of your life?

12. Throughout the story, secrets are kept—about Christopher, about the affair, about Charles’s aneurism—ostensibly to protect others from pain. Is there anything wrong with this logic? The author says that lying comes with the territory when your parents get divorced, and you don’t share information about one parent if you think it will disturb the other. Do lies of omission pave the way for bigger lies? Is a lie ever completely harmless?

13. Is it fair of Malabar to demand that Rennie never sell the necklace? Which verdict of an appraisal would be worse: for the necklace to be valuable or valueless? Would you do as Rennie does and avoid the question? Is there an heirloom in your family that’s been divisive?

14. The author shows us Cape Cod as a place of beauty, history, and bounty. In what ways does the setting contribute to the meaning of the story?

15. Rennie actively reads to help her clarify and articulate her experience. Margot tells her, “You have no idea how much you can learn about yourself by plunging into someone else’s life (138).” What light does this story shed on your own experience as a parent or a child? Have books helped you make sense of your own life?


Why Be Happy When You Could Be Normal? by Jeanette Winterson

The Liars’ Club by Mary Karr

The Glass Castle by Jeannette Walls

An American Marriage by Tayari Jones

The Mother Knot: A Memoir by Kathryn Harrison Small Fry by Lisa Brennan-Jobs

The Descendants by Kaui Hart Hemmings

The Whydah: A Pirate Ship Feared, Wrecked, and Found by Martin W. Sandler