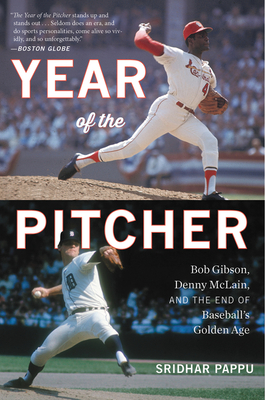 The Year Of The Pitcher

“Both a pleasure and a revelation.”—Daniel Okrent, author of Nine Innings

In 1968, two astounding pitchers would dominate the game as never before. One was black, the other white. The stoic Bob Gibson, together with the St. Louis Cardinals, embodied an entire generation’s hope for integration at a heated moment in American history. The flashy Denny McLain was a crass self-promoter who lived a life apart from his Detroit Tigers teammates, searching for fame. But for one season, the nation watched as these two men and their teams swept their respective league championships to meet at the World Series.
Gibson set a major-league record that year with a 1.12 ERA. McLain won more than 30 games in 1968, a feat not achieved since 1934 and untouched since. They would reach these heights against the backdrop of assassinations, while boys boarded planes to Saigon and riots swept through American cities, forever changing the fabric of this country.
In the grand tradition of David Halberstam, The Year of the Pitcher evokes a nostalgic season and its incredible characters through the story of one of the great rivalries in sports, painting an indelible portrait of the national pastime during our most turbulent era.

Praise For The Year Of The Pitcher: Bob Gibson, Denny McLain, and the End of Baseball's Golden Age…

"Bob Gibson, Denny McLain, a transformative season, a fabulous World Series, and a nation undergoing its own radical change - they've all found their perfect chronicler in Sridhar Pappu. His book is both a pleasure and a revelation."—Daniel Okrent, author of Last Call: The Rise and Fall of Prohibition   "I covered Gibson and McClain in the 1968 World Series, but I never grasped what it all meant to the nation and its pastime until I read Pappu's rich, insightful, lively book."—Robert Lipsyte, author of An Accidental Sportswriter   “Here’s the rare baseball book that succeeds as first-rate sports-writing and dramatic history. Sridhar Pappu tells the story of Bob Gibson and Denny McLain brilliantly, with prodigious reporting and beautiful writing.” —Jonathan Eig, NYT bestselling author ofLuckiest Man: The Life and Death of Lou Gehrig and Opening Day: The Story of Jackie Robinson's First Season    "'The Year of the Pitcher' stands up and stands out . . . Seldom does an era, and do sports personalities, come alive so vividly, and so unforgettably."—Boston Globe   "Explores so much more than the battle between two pitchers and their teams . . .Pappu is especially insightful in his discussions of issues of race that pervaded baseball and American society . . . A fine history of a vital period in the history of not only baseball, but America."—Kirkus Reviews   "This exciting work by New York Times columnist Pappu is a sophisticated look at the 1968 baseball season . . .  Pappu gives a comprehensive look at the careers of the two superstars of that year, Bob Gibson of the St. Louis Cardinals and Denny McLain of the Detroit Tigers. As Pappu moves from their early years to the final legendary World Series battle between their two teams, he skillfully weaves the two players’ contrasting styles—McLain’s brazenness and “visions of grandeur” and Gibson’s steely gaze and “fierce persona”—into a larger story about the pitchers’ effect on baseball; changing attitudes about players’ rights; and the shadow of politics and race cast over the sport during the year of the assassinations of Robert Kennedy and Martin Luther King Jr. With skillful writing, Pappu also illuminates the ongoing role of Jackie Robinson as he brings to life the events of this tumultuous year."—Publishers Weekly   "New York Times columnist Pappu offers an exciting look into that legendary season, beautifully capturing both pitchers' fascinating journeys throughout their careers. The author effectively interweaves the stories of McLain and Gibson in an engaging fashion, engrossing readers with the rivalry of Detroit and St. Louis. Enjoyable chapters describe the lead up to one of the most exciting World Series in baseball history, in which Detroit came back to win the championship from a 3–1 deficit. VERDICT: Devoted baseball fans will appreciate this story from one of major league's best years."—Library Journal   "I didn’t think there was any more I could learn on the subject that I didn’t already know, but 'The Year of the Pitcher,' by Sridhar Pappu, due Oct. 3, is a compelling tale of all that America was in the turbulent year of 1968, told through a (mostly) baseball prism."—Mike Vaccaro, New York Post   "[Pappu] brings historical context and fine biographical narrative to baseball’s place in society in 1968." —Pitt

Sridhar Pappu writes “The Male Animal” column forthe New York Times. He began his award-winning career as a feature writer for the Chicago Reader and has served as a columnist at The New York Observer and as a correspondent for The Atlantic. In addition he worked as a staff writer at Sports Illustrated and The Washington Post. A native of Oxford, Ohio, and graduate of Northwestern University, he currently lives in Brooklyn.